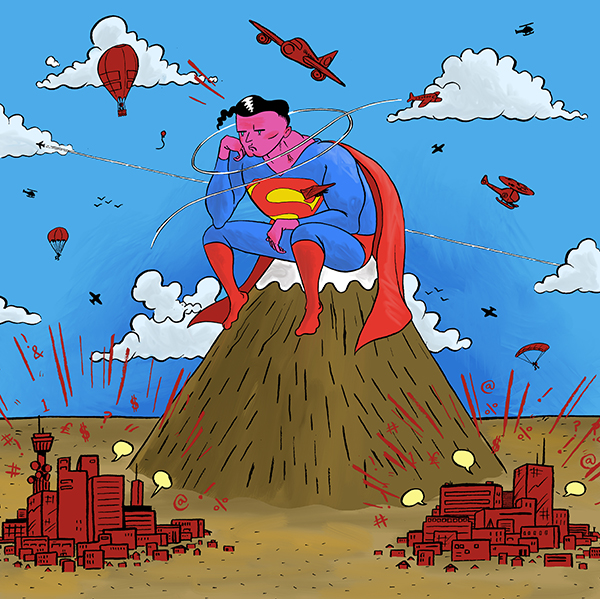 If you really think about it, the earth is tiny. Well not tiny, but smaller than you might think. Relatively speaking. I spend most days far away. Which isn’t that far any more. I could be at the highest peak of Kilimanjaro and eventually someone will find me. Time does not pass so slowly. A matter of weeks to you could be a moment to me. And why is it that the higher something is, the more difficult it is? People just want to conquer it. And this is happening more and more. It makes it so that even a huge mountain is not enough to separate myself from others. Your obsession with tall things goes further than that, though. Like tall buildings. Sometimes I go to the top of tall buildings, but they have many down sides. One obvious one is that they’re ugly and I don’t like them. Another is that, it’s actually really easy to get to the top of a tall building. It’s just that hardly anyone ever goes on the roof. That surprises a lot of people. Like, ‘if you were in a tall fucking building why would you not just go to the roof?’. Because people in tall buildings have a job to do and no time to saunter off to the damn roof. Other places where I can be alone are extremely dark and/or smelly places. The sewers. The outskirts of cities at night. Any city with a river can be dark and smelly. If the tide is out, and in your in arse-end of nowhere East London, that’s great. The Thames leaves a smell behind that doesn’t bother me, but very much bothers humans. Once I stumbled upon some sort of illegal rave which fell apart because A) the sound system wouldn’t work and B) it fucking stank. It also was not summer. Even the guys selling pills were saying, “It’s cold and I want to go home. Do you want any pills or not?”. Anyway, none of that really helps me get to the point. What I’m saying is that the earth really does feel small, to me at least, because I can try to get away but there’s hardly any place where people will not tread. I’ve taken to just flying around non-stop for indeterminate lengths of time. Then, I fly past the same spot I flew past earlier and get a little depressed. I have nowhere to go. Engaging with the rest of civilisation is fine, but becomes tiresome after not too long. No one in the poorer or more deprived areas will really talk to me, and conversation in more successful countries is fairly trivial. Your priorities can be a little skewed. It’s weird listening to someone talk about buying a new pair of shoes after spending a day steaming myself in a hot spring in the middle of Iceland. It’s like, even if you don’t get a new pair of shoes, you still won’t have stuck your ass in some fresh hot water in the middle of nowhere like I just did. Once there was a power cut in a city I like to stay in, and it was all panic, confusion and frustration. Nobody knew how to do anything. I asked why they couldn’t just go back to setting fires to keep warm and cook things like they used to, but then they all just looked at me like I was crazy again. This is what I mean when I say it becomes tiresome. I forget how knowledge in most areas has been lost. Survival knowledge, that is. During this power cut I tried to explain how there were and in fact, are, people who rely solely on their natural surroundings to survive and they’ve never had it any other way. This hardly ever gets through. It’s like I’m talking to grown-up children. It’s so ironic because where I come from, they all hate me for being so similar to humans. But being stuck here it feels as though I am not similar enough.

Georgia Iacovou is an artist who’s approach to making is that of making collections and indexes. She has self-published a number of books, one example being a series of books which attempt to explain and analyse the lyrics of Nirvana songs.