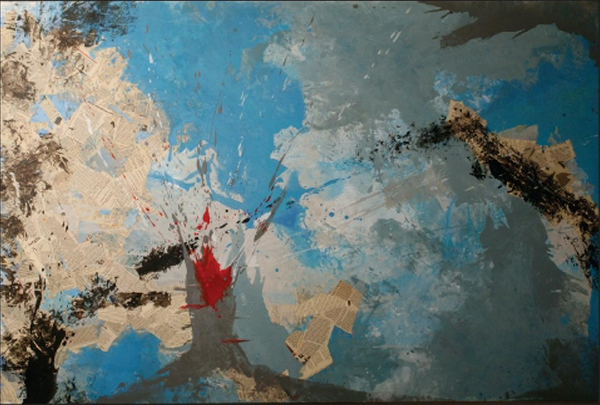 A fall into delirium and despair.

It is always in the deepest shadows of Miglio’s despair that he considers the flight of llamas. It is an automatic response; a safety valve. Such considerations raise his spirits and soothe his broken teeth. The thought of those nervous creatures overhead flailing the air always calm the demon; keep him from killing the neighbours.

There was a time in his life when he thought he’d done with despair or loneliness or depression. Or whatever was the clinical name for his condition. He went for years without so much as a backward glance at the guillotine of his youth. A blessing of sorts. Because whenever he leaves the house he has to run back before the rain starts like a machine again. His city, after all, is crawling with cats of common knowledge, and everyone says it can’t go on like this: the mechanical words and the unread stories. He knows for a fact that people who complain get taken aside. The proof is all around. It’s in the lost faces and vacant glares of those you meet and the sudden glance in the direction of a threatening noise.

There is always hope that someday the world will return to quiet things, normal things; a great notion of a secret heaven awaiting. Until then, Miglio believes, there is only vigilance and despair.

Sometimes, in the clutches of autumn, the watchers draw red stones out of the water. Miglio keeps his own ghosts.

The first imaginary man stands in the kitchen and presents him with a grave insult – something to do with the parentage of pigs and the proximity of his maternal line. Or something about the way he lived. Or the mistakes he’s made in his life. Or some other comment that is a condemnation of every consideration Miglio ever owned.

Miglio directs a roar of profanities and mockery in return. Hard throated and red-faced by the open summer windows, the entire neighbourhood beyond.

The boiling venom he unleashes is insufficient so he throws several wild fists at the imaginary man’s non-existent face and body. This uncorks the man and blood spits out the top of his head. He begins to sink to the floor but Miglio continues pummeling him; he keeps following him down with his fists,  delivering hard blows until the spectre is prone and helpless. Then he kicks the invisible head, spitting out his mouth at every raging thrust, punctuating his attack with a well-placed scream until the man that isn’t there seems lifeless and dead. He gets down on his knees and holds the imaginary man by the collar he doesn’t have. He puts his face near the eyes that would have seen him if they were real.

“If this house flies into the air I’m going to hold you responsible.” He moves his hands to shake what would be the limp head if it was actually there. “Do you hear me? I’ll come back here and finish the job. I won’t stand for it. Not for a minute. Houses stay on all fours. Get it?”

Accepting the idea that, in law, silence gives consent, he finally lets him go. ‘I’ll clean up the invisible blood later. For now, let him bleed’, he thought.

Yet he always races up the stairs to every window to make sure the house is still settled in its foundation. He stays at this until he is satisfied. Only then does he return to the kitchen.

Relieved then, Miglio allows himself a laugh. Though hours later he will panic, wondering if any of the neighbours heard him in his fit. Wondering what they might be thinking or imagining was happening inside “that house.”

Avia calms him with feathers and tea. She did it when the old woman died, and she does it again every time he melts to the floor in one of those red-faced rages. She does it after he checks the upstairs windows and mumbles something about the rockets – the conspiracies, the llamas, the efficacy of houses. He is so agitated, incomprehensible; veins at the neck and temples. Avia knows what to do.

The golden swirl of Tieguanyin tea and the basket of feathers for him to run his fingers against always pacify him. For a while.

She catches him talking to himself quite often – but she knows all about it. Sometimes the conversations are like fire – there is no need to stop them. In the crosshairs of a normal day, Miglio kills many people. Avia is his saviour. With her tailored hair and fitted sheets, and his penchant for violence, they make a perfect duo.

The second imaginary man is at the doorstep in the morning. He holds an envelope with a letter from the Central Agency in his left hand, and a jar of fig preserves in his right. Miglio stands behind the screen door, deciding.

RW Spryszak has most recently appeared at A-Minor Magazine and in the surrealist journal Peculiar Mormyrid. He produced “So What If It’s True,” a collection of writing from the notebooks of the late Chicago slam poet, Lorri Jackson. As Managing Editor at Thrice Publishing he is completing an anthology of international surrealists and outsiders to be released this Fall, while a full list of atrocities can be found at his website.