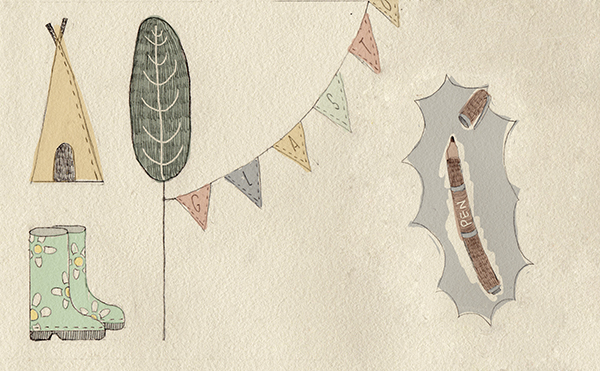 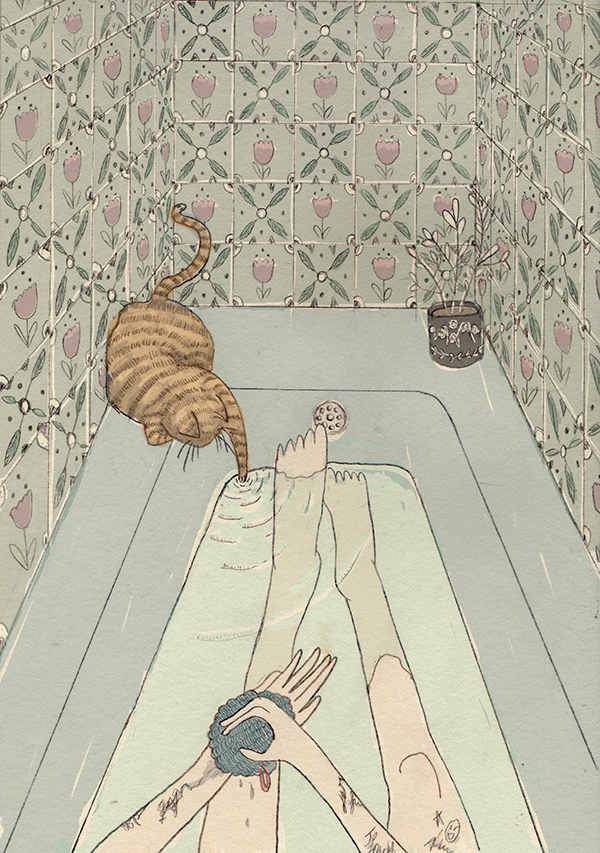 A tale of summer festivals past.

She decided to wait around in front of the stage for this one, the artist wasn’t that famous and would probably come out himself to clear up his set and help the crew out. These were the best kind because they were so pleased to be asked. She had with her her marker pen, thick and black, purchased especially for the purpose on the Tottenham Court Road in an expensive stationery shop. She had decided this year it was worth the extra pennies to have a really high quality pen.

A few other people were waiting too, some with the rag-tag air of those who didn’t quite know where to go next, unfolding programmes and arguing with their friends. A couple of fans, murmuring excitedly to each other, leaning on the metal barriers that stood in front of the stage. The tent smelled like mud and beer, it was dark but a wedge of sunlight came in at the door. Beatrice sat down on the floor, prepared to wait at least another 20 minutes. She didn’t have anywhere to be until a big star in a couple of hours, and he was much less of a sure bet.

It was her second trip to Glastonbury, the first had been a few years ago but she was heartened to find the experience much the same as it had been previously. The same permissive spirit meant that no-one gave her a second look and she could wander the fields alone for hours without anyone looking at her with patronising sympathy, the way they often did in London, just for being alone. The camp site, rowdy and haphazard, was the perfect place to pass unnoticed. She wrapped herself in the uncertain cloak of anonymity and revelled in it.

The two fans at the front of the stage stirred excitedly, and yes, there he was, the musician who had thrilled a crowd of 500 just moments before. A small crowd by Glastonbury standards, but he had been visibly overwhelmed by it, and Beatrice’s heart had warmed to him. He had said ‘Glastonbury! I can’t tell you how much this means to me! After so many years of pushing amps through the mud to try to get on at the karaoke tents in the green fields, to be on a real stage!’ and his voice had broken as he registered the achievement of it. He went right up to his fans and introduced himself, smiling broadly at the excited looks on their faces. Beatrice got to her feet with a wince as her overused feet tingled with pain.

‘Thank you so much for coming’ he was saying as she made her way over, ‘it means so much to me’. What a nice man, she thought, approvingly. She prepared her act and waited patiently for him to be done with them. He had signed their programmes and let them take selfies with him, grinning broadly in the photo in the style of a man who can’t quite believe these strangers want a photo with him. He noticed her and moved towards her eagerly.

‘Hello! Thanks for coming to the show’

‘It was wonderful!’ she gushed, ‘really great, I enjoyed it so much, you’re so talented’

He laughed, ‘well it was a fun one to do, Glastonbury always is’.

She smiled and gently explained what it was she wanted him to do.

He looked at her blankly, unsettled.

‘But, why? I could sign a piece of paper, if you don’t have one I’m sure I can find something’ he said, patting himself down and making to check in his pockets.

‘Not everyone.’ She grinned at him, ‘just the ones I like’.

As usual, the flattery allayed his feeling of unease, and he smiled back, flourishing the pen. This was Glastonbury, she relied upon him thinking, weird behaviour was par for the course.

She pointed to a reasonably sized blank space on her arm ‘anywhere here’.

He scribbled his name, and as usual the hairs on the back of her neck pricked up with the contact.

She contorted her arm so that she could see the signature. It was more of a scrawl, and she didn’t expect anyone else would know who’s signature it was. But that didn’t matter, it was there, on her body. She was glad she had spent the extra money on the marker pen.

‘that’s great, thanks!’ she said chirpily, and took the pen he held out to her. He smiled at her uncertainly again, and walked away.

She sometimes wondered whether these people thought about her later on, whether they tried to fathom why she wanted them to write on her body. She didn’t flatter herself that they would give it much thought, but enjoyed the possibility that these people, these musicians on the edge of stardom, carried her with them after their meeting. She had very specific rules, despite what she had said to him. Only people who she liked the music of, if she couldn’t stand it then she would give them a wide berth, no matter how famous they were. All parts of her body were up for grabs, though she usually only extended the more easily accessible ones. She had, at times, let them sign right across her face, but usually they balked at the idea.

*
By the end of the weekend she was tattooed in names, every inch of visible skin (and some not so visible, a particularly lascivious guitarist had insisted on signing so near her nipple as to make no difference) was covered in the marks of others. She was done, satisfied with another festival well-spent. At this point no-one gave her a second glance, marked as everyone’s skin was with the mud and grime of the festival. She was immersed in a rag-tag tribe of what the newspapers would call ‘revellers’, in varying stages of exhaustion and euphoria. She sat, waiting for a bus towards home, in the sunshine, sweating slightly. Some smudging was inevitable. It didn’t really matter.

At home, several hours on a hot coach later, she spent the evening readjusting. She was tired, but cooked dinner, watching the knife as it sliced through the onion as if disassociated from her own body. Fetched the cat from the neighbours house and let it curl up next to her on the sofa; her neighbours, well used to her oddities, hadn’t batted an eye lid at her blackened appearance. Her empty flat reverberated with the stale silence of the last few days, the sound pressing on her ears in direct contrast to the noise of the festival. She sat, ensconced and unwilling to do what she knew must come next. Work tomorrow, and an office full of blank stares and daily micro-aggressions.

Finally, before bed, she went up to her bathroom and turned on the taps in her bath. She spent some time getting the temperature just right, turning the hot tap down to a dribble and correcting the heat with the cold. She ran her hands through to check that it was cool enough to enter, then took off her clothes with a rush, leaving them in a pile on the floor. The air in the room was cloudy with heat, the mirror obscured. She could feel the words on her body, dark and definite, marking out the exact weight of the experience. She thought about the conversations she had had with these musicians, so blankly uninterested, then briefly piqued. She lowered herself into the bath. Her graffiti’d limbs looked up at her, bloated in the water. She lay there for a long time, waiting, while the names clinging to her body floated off and away from her, disintegrating into the soft water.