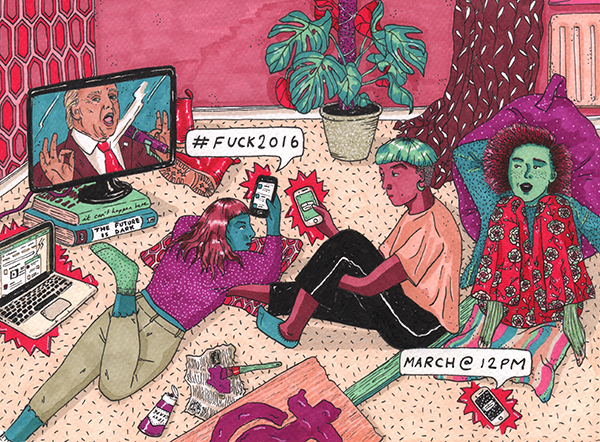 In defence of Social Media

There is no denying that 2016 was a tumultuous year: the UK’s European Referendum, the Orlando massacre, the US Presidential Election, the list continues. Thus, our entrance into 2017 was marked by an outpouring of dissent towards the past year, including the rise of the hashtag #f**k2016 on Twitter. Perhaps unsurprisingly, subsequent forecasts for this year were rarely optimistic. The changes we witnessed in 2016 will surely have their consequences.

Increased social media usage has also come under fire for stunting real life conversations, seeing adults and teens alike favouring time spent socialising on online platforms to that of real life participation. ‘Slacktivism’ has recently risen as a term to shun the showing superficial support or a cause online in order to make one feel better about oneself through the illusion of making a difference. However, is social media all as bad as it seems? Can it be utilised positively to combat the goings on in our world?

I would argue that social media will become an increasing proponent in bringing communities together in the face of attempts of divisions, on both a local and global scale.

As the term ‘slacktivism’ is a portmanteau of slacker and activism, its negative connotations are evident. True enough, many actions of online support are widely criticised for being superficial and achieving little: whilst the changing of a profile picture does promote a sense of unity and support, it requires practically zero effort or innovation, and is realistically unlikely to be seen by anyone impacted by the issue raised. Nevertheless, 26,000,000 Facebook users used the rainbow flag overlay in support of same-sex marriage in 2015, and was then followed by the use of the French Tricolour in remembrance of the 130 victims of the 2015 Paris terror attacks. Despite the argument that neither such action was monumental in propagating change and could even be accused of promoting and prioritising Western issues, and that it acts as a smokescreen for many people’s ignorance of wider global affairs, it brought about a sense of international community.

Similarly, people’s messages of condolence on social media following the Orlando shootings were comforting in signaling a wider homogeneity in society, but practically the help that was really needed was blood donations; it could be said that feet on the ground responses made the only real impact. Nonetheless, people’s simple typed messages of support do have positive impacts. Where abominable acts are made with the aim to drive us apart, the very ‘social’ aspect of social media can combat this. Any act of community is valuable.

The use of social media to come together was seen after the suicide of Leelah Alcorn to raise conversations surrounding trans rights, which saw the rise of the hashtags #ProtectTransKids and #RealLiveTransAdult. Isolation can ruin lives, and open discussion can hurt no one. Memorial events were held globally, including in Washington and London. A petition supporting the introduction of ‘Leelah’s Law’, banning conversion therapy, garnered over 330,000 signatures, and her death was cited as an influence of Cincinnati’s 2015 outright ban of conversion therapy. The discussion surrounding the matter not only offered support to members of the trans community but also created enough ‘noise’ to prevent the matter going unnoticed.

In a world fuelled by money, a turning point in social media activism is inevitably reached when signs of support, no matter how artificial, are accompanied by the financial. The ALS Ice Bucket challenge took social media by storm in the summer of 2015, designed to raise money and awareness of the progressive neurodegenerative disease, and its popularity ensured that the campaign was highly successful in both aspects. The related hashtag has been tweeted over 6,200,000 times, but even more impressively, $10,000,000 were raised in a thirty-day time period. There has recently been ‘groundbreaking’ scientific research funded by this, which has lead to the discovery of a third gene responsible for the disease; this has, in turn, increased the speed of the search for a cure. Whilst the motivations of people’s participation were perhaps often dictated by social inclusivity and their own fun, the impact of such is undeniable. If pandering to the self-centred nature of social activism is what is required to make it effective, so be it.

Despite the global reach of Social Media and the good it can clearly achieve, social media activism is perhaps most effective on a local scale, as it has real-life impacts, and is, therefore, more likely to see people motivated to help, as they can see the result themselves. A local example of a community brought together by social media is the aptly named private Facebook group ‘Fleet Parents’, with just shy of 10,40 members, with Fleet itself having a population of 38,700 (2011 census). A primary purpose of the group is to share reviews and opinions on aspects of the local community and publicising local events. However, the impact of this group goes beyond a digitalised mother’s playground meeting. At the end of the year, a plea went out to raise money for the funeral of a young mother. £3,000 was raised in three days, and there were outpourings of offers of help from local businesses, who provided flowers, food, music and a venue.

This group also played a role in the local campaign ‘Together for Freddie’, which aimed to raise the funds for a local two-year-old with Category Four Tumour Hypothalamic Hamartoma to be treated in the US, as the NHS couldn’t provide the treatment. The first stage (November – January) raised £225,000, and the second phase, starting mid-January, has raised £128,000.

Clearly then, the use of social media is hugely beneficial to communities such as this, because without it such projects could not be run, and in this day and age it is a vital tool for doing so.

A beauty of social media is the way in which it can be used to organize events. No longer are protests and walk-ins by invitation only, or reliant on the involvement of relevant communities to hear about the event. Evidence of such was recently seen in the organization of the Women’s March, which saw nearly 7,500 people following the London event, and the women’s march on Washington scheduled for 8th March has 750,000 followers. These events are significant in materializing hypothetical support into more visible formats.

It is evident that the phenom of social media activism is imperfect, and is, on a wide scale, used ineffectively, as ‘support’ is largely futile and a means of self-gratification. However, it can also be seen that social media activism has a large power to be harnessed. The power of discussion should not be dismissed, conversation, engagement, and awareness are better than silence and ignorance. Furthermore, local communities can be brought together to really make a change to each other’s lives, and on a grander scale, huge amounts of money can be raised for charity. In short, when social media activism goes beyond the single, prompted click of a button, or a statement composed of empty cliches, it is a valid means of global activism against division and problems, and even the symbolic acts are a small step towards that and hope of a brighter future.

Helen Chatterton is an English student with an addiction to caffeine and Netflix. This has inevitably led to the development of antisocial sleeping patterns.