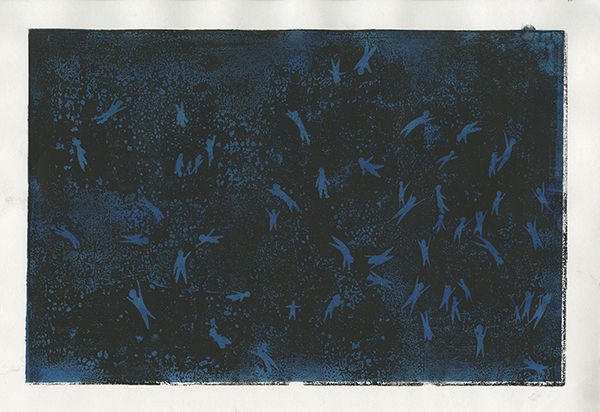 Body of water, sea of bodies

Its name is also 'in between lands': Mediterranean.

You’re scruffy, late for work and you’re desperately needing a coffee and you look ahead, beyond the rails and there it is: discover Croatia; bathe in the Greek islands; live the glamour of Côte d’Azur. Massive posters everywhere, in every station, in every corner, summoning you with these appetizing photos of all shades of blue – the Mediterranean. A ubiquitous symbol of perfect living, with beautiful hues of blue, amazing beaches, fabulous food and relaxed lifestyle. Oh yes, that is the dream.

Then you perhaps your train arrives, you step inside, get one of the free newspapers to keep you company for the ride and as soon as you glance at the front page the clear, blue, heavenly waters of the Mediterranean become somewhat murkier.

End of May and the death toll of the refugees is higher than ever. And this is just the beginning. As the weather starts to clear and become warmer the number of people attempting to cross will be inevitably higher. For the Mediterranean, this is a glimpse of what the summer of 2016 will be like: no more great holidays, jaw-dropping landscapes; no more a mixture of history, tradition and leisure; the Mediterranean will be a symbol of death.

There was a time where it was the centre of mankind. Its name was The Sea as if the only one. Phoenicians, Egyptians, the Fertile Crescent not too far; Minoans, Greeks and Romans. All around its margins the seeds of writing were sowed; mathematics, astronomy, philosophy blossomed; politics, morality and religions spread roots. Its name is also ‘in between lands’: Mediterranean.

In between lands: the sea is a resource shared by Europe, Africa and Asia Minor. Looking at the sea, we’re looking at each other. This proximity potentiated movement, commercial trade, shared knowledge and cultural assimilation. It also fed the worse of human behaviours: power control, conquest, war and prejudice.

Its name was also Mare Nostrum, our sea. Not yours, ours. Control of sea meant control over the whole world. The body of water was a fluid route but also a stark divide.

Across the waters, lies Europe’s ultimate Other, its own neighbour. Despite all shared history and roots, or maybe because of them, our neighbours seem exotic, backwards and fundamentalist like they were our derailed brothers who, somehow, lost their way and lagged behind, or our evil counterpart. Margins pressed against one another.

But to seek a sense of togetherness by summoning a common “Other” doesn’t seem to be doing Europe any favours: in a time when Europe dismissal seems imminent, closing the borders and turning inwards is not an act of self-reflection – it’s sealing off an area for implosion.

If, with the economic crisis, the gap between northern Europe and, well, Mediterranean countries was widened, now  the refugee crisis is turning it into a seismic fault. Failing to act now is not only ignoring the desperate appeals of mercy by the “enemy” or mistrusting its intentions; it is lack of cooperation and sympathy for your own – the Mediterranean countries are being left alone to deal with the immediacy of the refugee crisis, and the northern countries are facing the demand to host the larger part of them. And I don’t use the term Mediterranean lightly – it could have been southern; but it seems that even within Europe are numerous Others and the prejudices seems to increase with the proximity to the Sea.

There are many political, social, economic reasons for the North-South divide but one thing is clear: as the gap between the two continues to widen, very little is left to hold Europe together.

The agreement made a couple of months ago is clearly insufficient and deemed to fail. None of the pressing issues has been tackled  and its minimal action is increasing pressure at the borders of Europe.

In the urgent discussion of rethinking Europe as a Union, the refugee crisis should not only be considered merely as one aspect, but one of the priority issues. The current situation contributes threefold for a redefinition of Europe: not only is it the right thing to do, but it will demand an equal standing between North and South Europe and it will help deal with the once-again-rising right-wing, foreign-hating extremist discourse.

It’s in moments like these, when the seams that unite us are about to burst open, that the worse in us comes to the surface. And now, coincidentally, we have the opportunity to see where are we failing, what symptoms lie beneath the surface, what divides us and what  we really think and how we react under pressure. Europe can take this opportunity to discover itself and its faults and work to improve them. As the fast approaching #Brexit ordeal reminds us, Europe, as it is now, no longer functions. An urgent discussion is needed to restructure and redefine its action and meaning.

So, maybe, to have a more united, refurbished Europe, we can’t close our eyes to the tragedy occurring on the shores; we shouldn’t consider more important fending off northern countries from overbearing pressure than the southern ones; we don’t want a Europe that, once again, allows the rise of anti-immigrant discourse.

Perhaps, we are willing to try something new: a Europe that’s more balanced and diverse, not defined by race but by cultural values; a Europe that not only looks across the ocean, but across the sea as well –  a Europe that trusts the values it was settled on.

As I get ready to finish this essay and bring it to a close, my phone beeps with a news alert – since 2014, 10,000 migrants have died crossing the sea. This should be more than enough by now. There are many names by which the Mediterranean is known, but let’s not make cemetery one of them. Being humane with the Other will, in this case, also mean being just with your own.

Perhaps we should allow the fertile basin that gave birth to us to, once more, feed a reinvention and help a new European Union flourish.Next time you see one of these posters, instead of just dreaming your next holidays, perhaps you can dream of a new Europe.