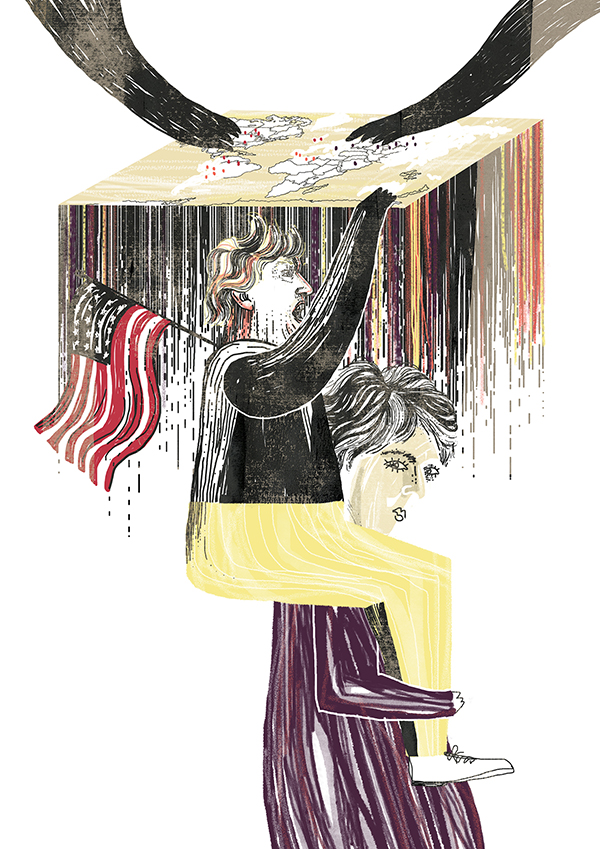 On the political hijacking of nostalgia.

The West right now makes me think of me when I lose at a game. When I start to realise the party is lost, I usually choose to deny it and grow nasty and bitter.

Theresa May said in January that the UK and the US had to join their effort to resist the “eclipse of the West” and “lead together, again”. Yeah, remember the good old times, Donald? Let’s make that happen again as if the past few decades had never happened!

Asia’s economy and population are booming, so are Africa’s, the Gulf is filled with oil money and Putin is not listening to anyone. Meanwhile, the West’s fate seems to be stagnation at best, rot at worst. That is so unfair.

The past centuries have been ours, that was enjoyable alright, but there are clear signs that the current one mightn’t be. That’s no secret but, at the same time, that’s not what people want to hear. Instead, they want to hear about greatness.

And what could possibly make us great if we no longer have an Empire on which the sun never sets, the power to draw silly borders on a map (the dream!) and to declare war or peace anywhere in the world?

Well, the very fact that we used to be great is quite great in itself, I guess? And truly that’s the only thing they could come up with. Any country’s flag, history, royal family or any other institution, and its culture as a whole, is now used to make us remember how great we once were.

The word “culture” here, of course, doesn’t mean funding the arts or fostering creative expression in education, because it’s not really our current culture and its evolution people tend to praise. No, it’s much better to wallow in the remembrance of the good old days Theresa and Donald cherish.

This is really just a political hijacking of the feeling of nostalgia. A recipe for disaster. Indulging in past glory and promoting a frozen collective identity is the best way to create tensions, as it prevents a society to cope healthily with the current evolution global changes.

Bad news is, nothing lasts forever. We are mortals. And as hard as we may try, nothing we make / build / create can last forever, especially when it comes to intangible elements like identity and culture. No entitlement to eternity, even for the greatness of Western nations.

Some embrace that evolution. Some don’t.

At its simplest, you have on one side the more privileged, who tend to see opportunities in the ever-changing world around us, because they have the necessary tools to take advantage of it. They have okay lives, okay situations, with the quasi-certainty that they will always land on their feet. They don’t feel threatened by immigrants coming to the UK to be kitchen porters, mostly because they’re not looking for jobs as kitchen porter.

On the other hand, you have the less privileged who tend to feel threatened by globalisation and the opening of borders. And maybe more importantly, they lose the comfort of knowing that Britishness will always convey the same traditional values, that same kind of comfort you feel when knowing that Quality Street chocolates never changed, and never will, even the ones you don’t like.

First there is this odd feeling of discomfort. Next thing you hear your country isn’t doing so great anymore. Jobs are nowhere to be found and the few left are taken by non-British people (doesn’t need to be true, you just need to believe it). And obviously having now the biggest wave of migration globally since World War 2 does not make things easier. Hence, this feeling of discomfort is joined by another one, that of nostalgia.

Everything was better before, that’s what every generation tends to believe. Before, when all borders were hard borders. When all nations were sovereign nations. When everybody in this nation would speak the same language and practice the same religion. And this will obviously translate in election results.

One thing we have to always keep in mind is that people vote for a reason. They go to the polling station because they are motivated by something. They care. Undermining that is anti-democratic.

I mean, we’re living beings. Survival is our goal. Going to another country because of a civil war is quite logical and natural. At the other end, fighting against someone you believe is threatening your already precarious situation is just as natural and logical, whether we like it or not.

From the difference in how people perceive globalisation and the opening of borders, two models emerge, with on one side the post-national and multiculturalist model, and on the other a strengthening of the nation and of its sovereignty.

If there is one thing Marine Le Pen is right about (please, just this one), it’s when she says that the division between these two different models is nowadays more important politically than the left / right dichotomy.

Because in a world that’s changing ever faster, people want to grab onto something rock solid, want to grab a lifebuoy to avoid drowning in the dreadful whirlpool of change. That’s how collective identity is used at the moment, as a way to put something tangible onto something that’s not, with the illusion that it will prevent an inevitable fall.

Human tower builder and boat dweller, Leo works with charities and tries not to take this world too seriously. For the sake of his sanity.