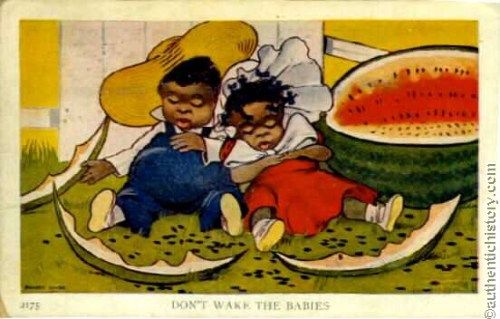 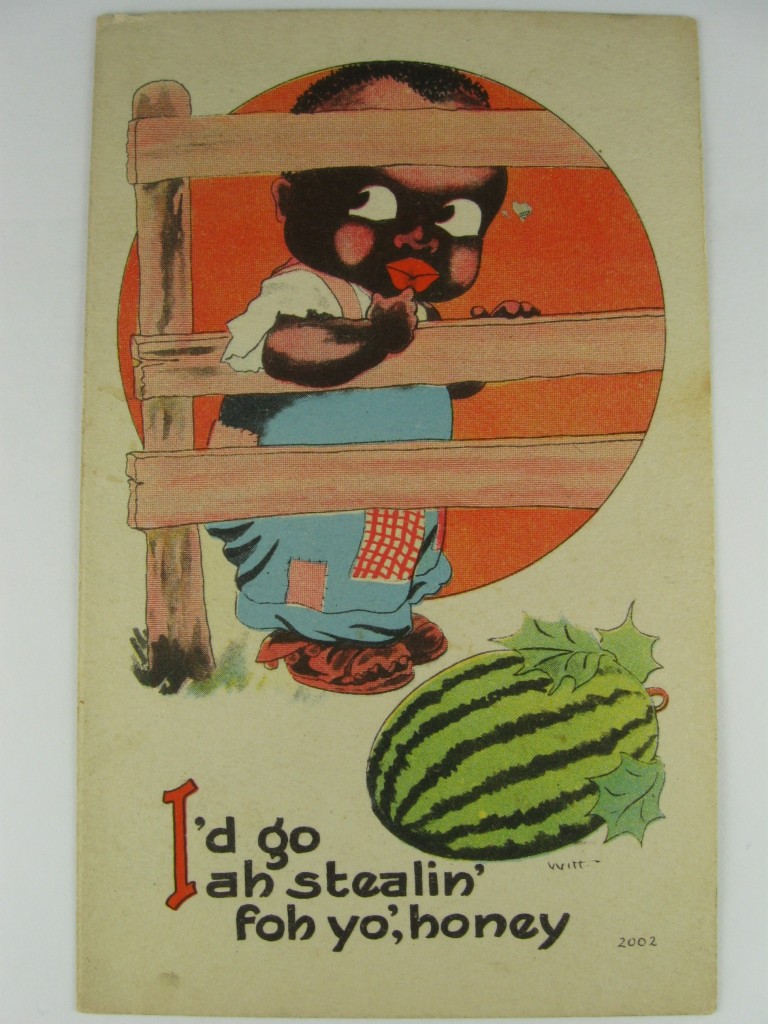 How the racist stereotypes associated with Black Americans and watermelon still persist today.

Watermelon: emerald, striated outer rind. Deep pink flesh at its ripest. The quintessential summer fruit has a well-documented racist connection to Black people in the United States. And being black often means wondering how people interpret you. Your skin, your gait, your hair. It looms, this idea that the tiniest movements aren’t just movements, but actions to be deciphered, filtered often through the cloudy stereotyped lens of others. Am I too sassy? Too loud? Too aggressive? Too threatening? Or am I perceived as an anomaly for not fitting neatly into any popular stereotypes?

The rudimentary, the everyday becomes political, negative even – a burden most White people don’t bear. Not only do our bodies and the actions we perform invite criticism, but the objects we engage with can have a change in meaning simply by our interactions with them. A young boy in a hoodie, a sagging of the pants, blasting rap music, the passionate defence of an opinion, a young woman’s brightly coloured hair – when worn or performed by us, many interpret them as menacing, suspicious, vulgar. Those interpretations, at best, result in the clutching of a purse or being followed around a luxury department store and, at worst, being killed.

And when something as simple as fruit is tied to such a dark, racist history – how does it change our relationship to it? Does it make Black folks hesitant to eat it in front of White people? Do some Black people imagine themselves being perceived as the overly-enthused coon caricature that permeated popular culture in the late 19th and early 20th century? I imagine that even for those who will indulge regardless of the company they are in, there is still a hyper-awareness that lingers.

Keith Woods, formerly of the Poynter Institute highlights this quandary well while trying to determine whether or not to publish a photo with watermelon as the backdrop with fellow colleagues, “Some of the Fellows said they’d never heard about any stereotypes associated with watermelons. Maybe that means the stereotype is fading away, one Fellow suggested, so why sacrifice a good photo for a has-been stigma? Another said she recognised an insult immediately and cringed at the thought of publishing the picture.”

Keith also breaks down the origin of the idea of enslaved Blacks as dense and feeble-minded, “Over time, the watermelon became a symbol of the broader denigration of black people. It became part of the image perpetuated by a White culture bent upon bolstering the myth of superiority by depicting the inferior race as lazy, simple-minded pickaninnies interested only in such mindless pleasures as a slice of sweet watermelon.” That level of crass racism and the images associated with it not only reflected a larger cultural sentiment about Blacks, but it materialised in the form of everyday items. The image of the exaggerated large mouth of a Black boy, excitedly about to bite down on a massive piece of watermelon appeared on everything from tableware and postcards to matchsticks and board games.

Through his research, writer Theodore R. Johnson III discovered the deplorably titled “Nigger Love A Watermelon Ha! Ha! Ha!”, a song with a melody married almost exclusively to our memory of ice cream trucks. And though an attempt to refute the song’s initial lyrics were made, it fascinates me that the song’s association with such a hateful period has all but dissipated.

Contemporary examples remind us that this racist trope can be called upon intentionally to undermine and reduce Black achievement or make light of a painful history. From the Boston Globe’s reference to watermelon in a political cartoon that sought to taunt President Barack Obama, to just recently where a New York City pizzeria named a pie topped with fried chicken, watermelon, and sunflower seeds, the “Pic-a-Nika”.

I don’t eat watermelon, solely because I’m not a fan of the taste, though I’ve enjoyed the artificial variety in cocktails and candy. The fruit does, however, occupy a similar space as fried chicken in American history as it relates to Black people. Though people of all races enjoy fried chicken, and despite the recent White, hipster cooptation here in NYC over the past few years, when and where I decide to eat it may largely depend on context. With whom am I dining? What is my relationship to them? Questions I might ask myself to determine whether or not I will feel judged. Or even worse, feeling bad that I care so much about how I’m being perceived simply for eating a certain food.

The idea of actively working to combat other people’s (often White people’s) negative perception of you can be mentally taxing, and situations where you are the sole Black person can feel particularly performative. Perhaps what this history inflicts upon Black Americans is a sense of paranoia – thinking of yourself, your actions as being watched, defined. Knowing that even when you’re simply leading a simple life, unsullied and as virtuous as possible, that someone may perceive it as otherwise.

Black Americans and the watermelon stereotype like many other stereotypes are cords tethered to the past and though that cord seems to be gradually weathering and fraying, it is still very much intact.