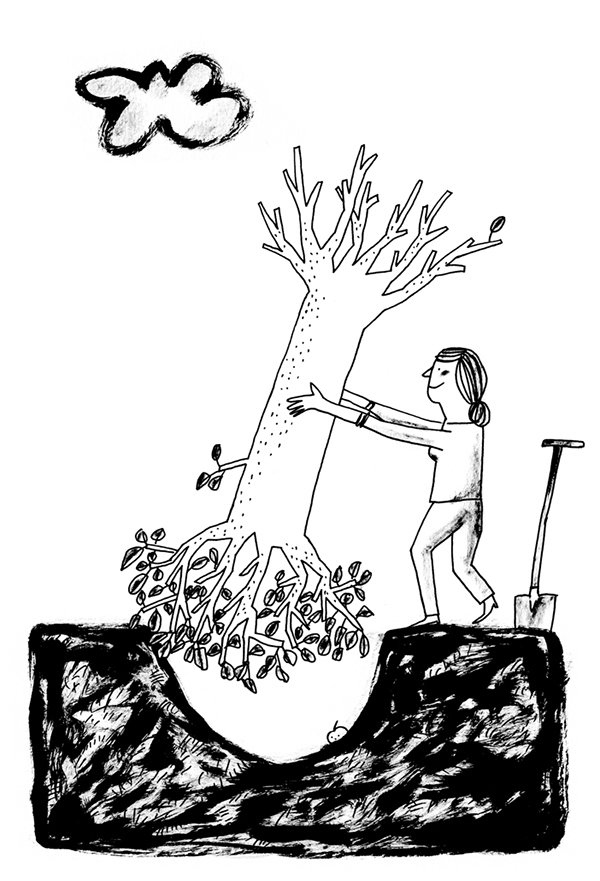 Staying is the new going

How deciding to stay might just be the harder choice.

Words by Maria do Norte & illustration by Rosa Linke

I am a little bit like a butterfly – I enjoy flying everywhere and going where the wind takes me. I left home in my early twenties and, since then, I spent the following ten years going, leaving, moving, wandering. Going is addictive, like a drug; it brings with it the excitement of a new place, a new life, a new adventure. Staying for me meant settling into a routine, the moment you take your life for granted, the moment you give up living. Or so it was how I saw it at the time.

When I was twenty-one, a friend drove me around in circles while I wore a blindfold in my eyes. I didn’t know where we were going. Finally we stopped, he helped me out of the car, we crossed the street, got into a building, went up the elevator, someone opened the door, the blindfold came off and twenty people yelled ‘surprise!’. Balloons filled the room and tears filled my eyes. I was about to embark in a life adventure – going to study for one-year abroad under the Erasmus programme, and I thought I knew it all.

I am thirty-two now. I live in a small place up north. There is nothing much further north from here, except mountains, sea, cold, wind, rocks, and if you keep going north eventually you’ll reach the North Pole. My journey here was a bumpy one. I was never the traditional person leading a traditional life; I wanted my life to be a constant adventure. As a child I travelled a lot with my parents and that planted a seed that never left. My Erasmus year was my first ‘outing’. I left Lisbon to a beautiful town in central Europe leaving behind friends and family, who organised an unforgettable goodbye party with traditional food, balloons, driving around with eyes blindfolded not knowing what was going on, and everyone I loved was in the same room. I still have a collection of four CDs of traditional crap Portuguese folk music, a gift to take on my journey so I would never forget my origins. In that leaving do night my sister and my friends cut my dreadlock – an ugly thing I had falling off my hair according to my mum – in a ritual meant to symbolize a new beginning: I was no longer a hippie girl; I was a grown up going to live by myself in a new city. How wrong I was I can only see now, as that was not the beginning of an adult phase but of the most gypsy decade of my life.

My Erasmus year was the best year I had so far. It must sound depressing saying that the best year of your life was 11 years ago, as if nothing really relevant happened since then. But that year taught me a lot about who I am, what I believe in, what my values are, and how I want to live. I met Julia and Rosa, two incredible woman that still fill my heart today. When I returned to Portugal the following year, I suffered from a common but, nonetheless, unknown condition at the time: post-Erasmus depression. I couldn’t readjust to my old style of living, to what I had left behind. It was much harder to return than it had been to leave a year earlier. I had changed so much, while all that stayed behind seemed to remain just the same. I bumped into an old friend in the street that had done her Erasmus year some years before, and I mentioned to her that I had returned recently. Her face turned serious, she held my hand, raised an eyebrow, and with a deep voice, she asked ‘how are you?’. Apparently my post-Erasmus depression was a condition that many leavers suffer from when they return to their previous environment, changed forever while ‘home’ remained the same, and learning to cope and live with being back. Returning is harder than ‘leaving’ or ‘staying’, but perhaps that is a conversation for another time.

After coming back home, I spent the next decade trying to recreate that sense of adventure and discovery that a new place brings by travelling and going of to live, work, and study in different cities and countries. I did that four times. Four times I started new somewhere where I often didn’t know anyone. The longest I stayed was three years in London, which, after leaving, I clearly knew I could never live there again, as it simply wasn’t the place for me. I moved up north and fell in love with a new place, the people, the atmosphere, the sense of community I had not previously experienced anywhere. And I met someone special. Shortly after, an opportunity to move again and follow a new life adventure presented itself.

It was a hard decision. Should I stay or should I go? How do you change the way you live? How do you come to terms with realising that, actually, the place where you live is the one where you want to stay, when a new opportunity pops itself in front of you and calls you to go? How do you break your own patterns? Where do you get the courage to listen to your inner self in a world that has such high expectations of you? As I sat at this conundrum, I did my research. I made tables with points for different factors I valued. I talked to people, I visualised what life would be like there, I went into counselling to scrutinise all these existential questions. I watched a Ted talk on hard choices where philosopher Ruth Chang talks about agency. She says that a hard choice is hard precisely because both choices are good choices, there is no choice better than the other, it is up to the individual to place their agency behind one choice. Is this what my life is going to be, always starting new somewhere else, never putting roots down? It is easy to be the one leaving and saying goodbye. It is hard to stay and see the others leave, as I learned years after my first outing when a friend left and I felt part of me was disappearing with them. I had never in my adult life made a choice of staying somewhere, creating roots, settling, putting up with routine, learning to love the everyday particularities of a certain place, even if it is not the best place in the world. And that is okay, because nowhere is the best place in the world.

Looking back, I realise I was at odds with the person I was in my twenties and the person I was becoming as I began my thirties. Going was exciting, fun, and new, and staying did never seem to offer that kind of challenge. It never occurred to me. Staying was always about the predictable, the routine, same old, same old things. What I hadn’t realised was that I was probably growing up, and suddenly all that going did not feel exciting or adventurous anymore. I had done it already; life had changed. I felt the need to put my roots somewhere. Leaving was no longer appealing; instead, a sense of dread at the thought of starting it all over again began to manifest itself: finding a bakery you like, again; where the bank is, again; flat hunting, again; meeting new people, again; making friends, again; new places to love, again; a place to print your stuff, again; where to buy nice food, again. Everyday simple activities we take for granted can be incredibly difficult and energy consuming when you start life anew. After moving cities and countries five times, it wasn’t new for me anymore. I couldn’t bear the prospect of starting life somewhere when I loved the city I had chosen to be in. This was a hard choice, it symbolised the end of an era – the gypsy twenty-something exploring the world – and the start of another – the thirty-something that knows how she wants to live and what she values.

Staying became the new going. Learning to love a place past its initial honeymoon stage where everything is new and exciting has been a constant challenge. The city I have chosen is dark in the winter. It is cold and rainy. In the summer the sun is up at 4am and down at midnight not letting me sleep. The weather is crap. But the people are lovely, there is a brightness and sense of community I have never experienced elsewhere. It is imperfect, but it is the place I have chosen. I have been here for two years. The first year madly in love with the city, and the second adjusting to its real flavours. The first year enjoying the excitement of a new place, and the second creating roots. The first year discovering my way around, and the second enjoying going to the places I like over and over again.  Deep down I am still a butterfly, only a bit more grown up than I was ten years ago. The dreadlock my sister and friends took off that night long ago is still sitting in an envelope somewhere in my sister’s room, a memorabilia of a time past gone. Although it was cut off more than ten years ago, it only left me recently when, for the first time, I decided to stay.

About Maria do Norte

Maria do Norte is an artist and dancer. She is a researcher during the day and enjoys reading and Tango by night. She no longer travels as much as just being alive sometimes is a constant adventure.