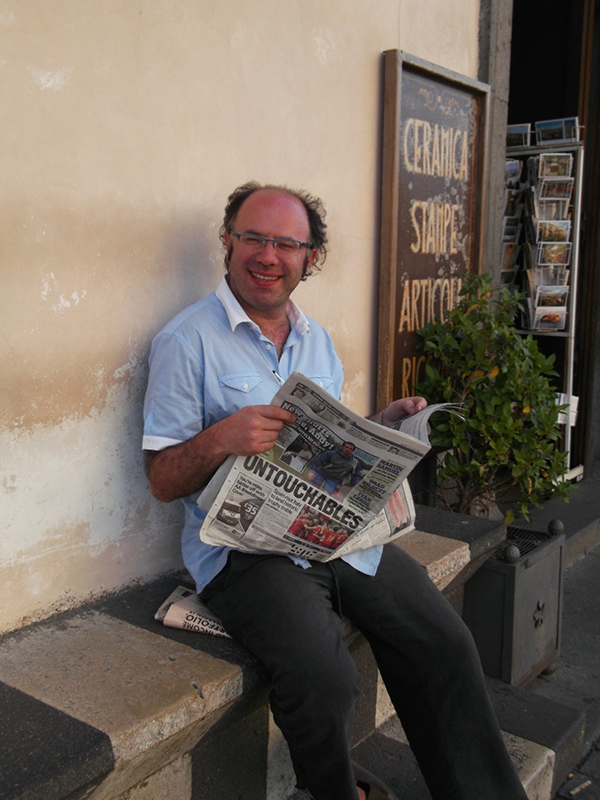 The power of narrative.

Stories are like seeds. They are easy to sow (a whisper, an image, a comment), but once they have taken root, they are difficult to eradicate. With such power must come a certain degree of responsibility…

This summer, one of my campfire-side reads was The Fabrications, a recently published novel by Baret Magarian, Anglo-Armenian writer residing in Florence, Italy. The Fabrications explores the power of narrative, art, and the idea of crafted reality. The novel features a washed up writer, Bloch, who decides to take a break from writing drugstore trash novels to write something about a bummed out friend of his, Oscar Babel. Bloch writes subtle improvements into his friend’s life, which, strangely, begin coming true, creating an overt metaphor about the power of stories. However, the power of narrative is then explored on a more profound level when Oscar is picked up by media shark Ryan Reese, who is the ultimate conjurer of false realities. Reese takes Oscar on as a project, or an experiment. He presents Oscar to the public as a guru, employing various media tactics and a whole lot of smoke and mirrors, and shockingly (or perhaps not at all), the public adopts Oscar as their modern day messiah. Though media culture is clearly being ridiculed to an absurd degree, the similarities between the novel and our current social and political climate were unnerving, to say the least.

The ability to create something from nothing, for example to create a god from an ex film projectionist/failed artist, is a frightening reality of media culture. The ultimate conjuring act. And the more frightening reality is the ease with which we as a public adopt these narratives as truth.

To explore the power of narrative and the craft of story creating, I decided to discuss these themes with Baret Magarian himself, gaining insights from him as a novelist, a.k.a, professional fabricator.

B: I think fiction interprets reality, or attempts to make sense of reality. Writing fiction is a selective process by which reality is filtered, cleaned and manipulated, after which the best bits remain like nuggets of gold.

N: So fiction is almost like a distilled version of reality?

B: Exactly. It is crafted reality. Fiction is also a way of coming to terms with real life, and can be quite therapeutic. But I wonder if that cathartic process can reveal truth to those who aren’t in it, or only to the maker.

In terms of my novel and reality, well, I suppose some of the characters are perhaps based on people that I know, and maybe it’s derivative of life…but this is a bit of a trap for a writer. Real fiction needs autonomy, and to be divorced from reality. Great writers create in a way that is cosmic, not autobiographical. The ability to craft fiction is the ability to conjure, it’s a trick. But it’s a trick that needs soul. It needs to be more than just a gimmick. It needs characters with depth and life.

N: In the role of the “conjurer,” or the writer, how important do you feel author intention is, as compared to reader interpretation? Which is more “true”?

B: Reader interpretation is more important, more valid. You [the writer] have your ambitions, but the work is to be sent out into the world. The text is truly born when it is received by the readers. At that point, you’ve done what you had to do, and the reader will do the rest. They will have their own view, and there will always be multiple meanings, multiple interpretations. The reader is engaged with the text, and you as the writer have given control away. The reaction evoked by the novel, no matter how big or small, gives the story life. Reader engagement to a story is like water to a plant: it gives life, creating a dialogue between the reader and the text.

N: And where does the writer fit into that dialogue?

N: Do you ever have the urge to join the dialogue?

B: I mean, it’s flattering when people are talking about my work. It is a privilege to spark debate. Writing, to me, is a gift you give to others, for them to retain a small part of you, of yourself and soul. The writer is like a soul-dispenser, giving away pieces of himself.

N: We live in a society where media culture runs rampant. We are bombarded with news, fake news, and caricatures of media figures. “Truth” seems to be an elusive concept. I noticed this phenomenon in your book, as Oscar is presented to the public as a guru, when in fact he is just as lost as the rest of us. How do you see us as a society dealing with these narratives presented to us by the media, social media, word of mouth, and news? How should we deal with these narratives in order to remain as close to truth as possible?

B: The way I see it, there are two dominant patterns. The first is the tendency to narcissistically adopt a cause, figure, or celebrity that is exposed in the media in a way that allows the person to identify with that figure, and to feel that that figure represents them. This is dangerous; this is the seed of fascism. The dangerous thing about these figures, people like Oscar Babel or Trump etc., is that they make people think, “this guy understands me, he speaks for me.” This is very seductive, this personal association with a prominent figure, and it’s nonsense. Their image is a non-reality, a media induced image. People in private are not like the image they project to the public. The image we see is cosmetically rehearsed: it’s cinema, not reality. The realm of art has entered the world of politics, sabotaged it. Now politics is just PR. They have adopted art for their own devices, such as theatre, gimmickry, and glamour. In this way, politicians become actors and demi-gods. The power and mystique that used to belong to artists have now entered the political world, which is confusing to us. The internet has cheapened politics!

Secondly, there is a fragmentation process, where if you’re not identifying with it, you are vilifying, or demonizing it. We adopt an “it’s not about me,” attitude and label it as other, hostile. This invites people into a black and white mentality, us or them, which doesn’t help happiness or intelligence, to see the world in these polarized ways.

B: The primary role of fiction as always is to entertain, to make people feel good. Fiction must charm us. People want stories. Why do we tell children stories? To comfort them, to help them sleep. Stories make our lives more pleasant, give us comfort. Fiction also helps us to make sense of reality, to articulate reality, and to give a voice to the unpleasant parts of reality. This is a service of the writer to society, to say the unsayable, what’s on the fringes of perception, and that function of art is precious.

Books can affect the way you think. They can make us understand things we may never understand, give us compassion. It’s about making people less selfish, allowing them to inhabit a different point of view.

N: It’s been said that fiction is often truer than reality. The title of the novel inherently implies that the story, or aspects of it, is a non-truth. But through fabrications, we can generate our own truths. Thoughts? What truth did you aim to expose in The Fabrications?

B: You have to say stuff that’s fabricated to get to the truth. Picasso said something like: “art is a lie that tells the truth,” and I agree. You need to take the reader into an unreal dimension to see reality. People don’t see what’s in front of them, they are sleepwalking, you need to arrive at the truth by creating a fabrication. People naturally recoil from direct truth, but truth through an enchanted prism, well, they are seduced into seeing that truth more willingly. You know, George Bernard Shaw said, “If you want to tell people the truth, you’d better make them laugh, or they’ll kill you.” In the novel there’s a clash between humour and deep heavy themes, profound topics, and this clash was deliberate. Art is often morally ambiguous…when you encounter that ambiguity, you’re forced to work it out for yourself.

N: How can stories and narratives be used (positively or negatively) in today’s social and political climate?

B: People get a sense of moral ambiguity from reading great fiction. The answers are unclear, and this process of interpretation makes people more intelligent, more questioning of propaganda, more attuned to multi-faceted existence, and less likely to be politically duped or persuaded. You don’t fall for the con man if you know the tricks. Fiction can make you more aware.

But most people don’t even read! I don’t want to overstate importance of literature, but it really has a moral function. Why did the Nazis burn books? No reading, no thinking.

N: What is the power of narrative? What are the responsibilities of this power?

B: The power of narrative is overcoming things, and finding peace. Storytelling is in tune with the impulse of the human species to overcome the odds. The classical arc of a story is always about conflict. Throughout history, we as humans had to find what we needed. That was the obstacle: to survive, to endure. That’s why we love the notion of conflict. We are still faced with these challenges, though refined (like in our job, searching for love). Finding happiness at the end of the story is very important. Story reflects struggle, which is a powerful impulse in the human condition. It makes us survive, deal with hardship. People need that, but don’t know they need it.

You need to say something true and meaningful, relevant, real…

B:  It’s a certain vibration or energy. It has to ring true on some level, real in the way food and wine and the sunset are real…literature should smell, taste, have a visceral quality. There should be smells of the sandpit, the arena.  Writing should be vulgar in a way, shake you, wake you up.

So perhaps the relationship between fabrications and reality is that fabrications are reality. Stories are the true mirrors of society, and these stories become “truth,” that ever-elusive concept we seem forever unable to define.