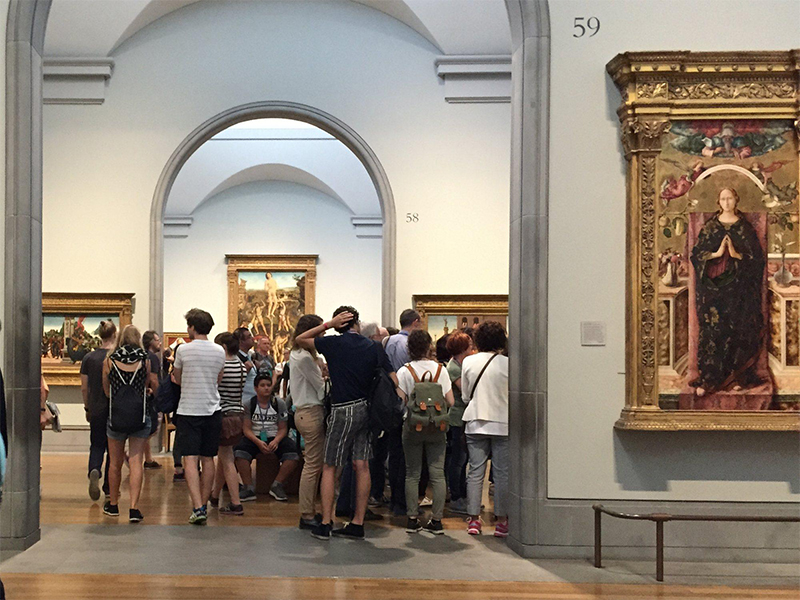 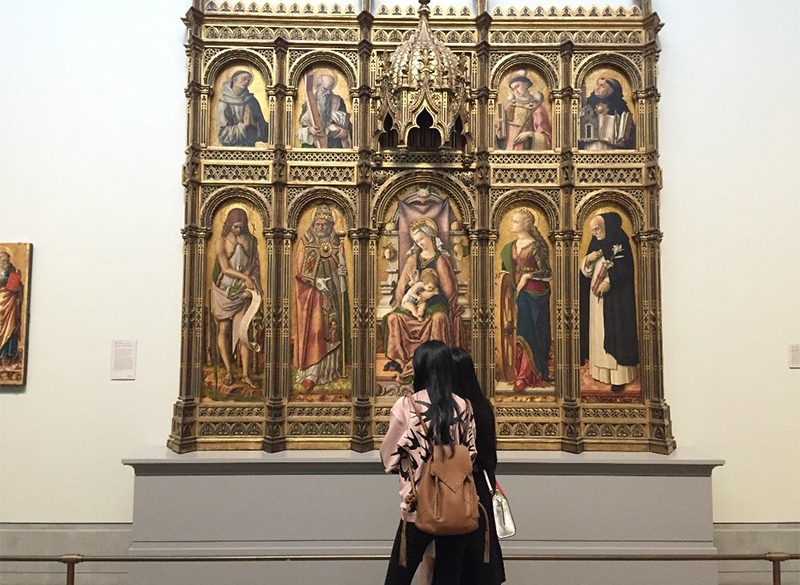 Let us take you to room 59 to experience a fruitful artistic ecstasy.

Sunday family trips to the National Gallery in London are among my most-cherished childhood memories.

Up from our distant suburb beyond the edge of the District line, near Heathrow, being in town was a rare treat. The Gallery was free, and money was an issue for us. It was the 80s, early 90s at the latest, so the Trafalgar Square the Gallery faced was still pigeon-filled and traffic-clogged and grimy. It was wintry and raining outside, probably. Which meant we were sweating in our coats, as it cost extra to use the cloakroom.

We must have gone through most of the rooms each time, as the Gallery isn’t that big, but I remember one room more than the others. Because it made me think about another, warmer, sunnier place. And about… fruit.

If you’re an audioguide-wielding tourist on a strict itinerary, you’ll probably hurry through Room 59 on your way to Botticelli’s ‘Venus and Mars’ (in the next room), the London ‘Virgin of the Rocks’ (two rooms over) or the Arnolfini marriage (take a left, then walk to the end). On its walls are works from Carlo Crivelli, a not-overly-famous 15th century painter from the Veneto. He didn’t make the cut for inclusion in Vasari’s Lives of the Artists, and his fame hasn’t exactly increased since.

But the slightly sweaty child looking at those big, brightly coloured canvases in a distant northern city 500 years after his death couldn’t get enough of him.

Why? One big, plump, tasty reason. Crivelli is arguably the most fruit-obsessed artist of all time. (Though one critic, much better-qualified than me to comment, argues that the same could be said about flies.) In Room 59, across several large panels, and two huge altarpieces, the same signature swags of figs, pears, apples and cucumbers, appear over and over again.

The pictures depict familiar religious themes. The precise proportions, strong colours and static compositions maybe remind you of Crivelli’s contemporary, and sometime inspiration, Giovanni Bellini, who was famous enough to get a mention from Vasari. But it’s the sheer fruitiness that really sets the two artists apart. Take, for example, the Vision of the Blessed Gabriele.

This panel gets wilder as you look up. From a lush landscape, bounded by the clean lines of a church based on a real-life building in Ancona, we rise to huge swags of fruit, festooning the Virgin and child, who emerge from a fiery rip of the panel in the top-right corner.

Then there’s his Annunciation, where the perspectival perfection of the street scene – set in nearby Ascoli – is overlaid with gorgeous detail after detail: from the peacock to the pot of herbs to the ornate Turkish carpet flapping in the breeze to the doves circling in the busy blue sky. Right in the foreground lie an enormous cucumber and apple: the latter of which seems to be almost as large as the Angel Gabriel’s head.

Fruitiest of all is the Madonna of the Swallow, which features piles and bundles draped all around the throne, dangling over the parapet and even in the Christ child’s hand. The bird that gives the painting its name perches discreetly over the throne, with his back to us – maybe aware that he’s not the real star of the show.

Over all these pictures, and the others in the room, is an overpowering sense of abundance, fecundity and lusciousness. All are bathed in radiant, golden, summery light.

And those big pieces of fruit help communicate this warmth and joy. When not inset into chairs or strewn across the floor, they’re a trompe l’oeil, dangling over the front of the edge of the composition or hanging across the top: not part of the scene, but giving it an extra depth. This 3D illusion gives the panels another layer of life, adding to the abundance. Still life painters in later centuries would hint at the first traces of rot in their depictions of fruit, as a way of suggesting the fleeting nature of beauty and life. But Crivelli’s fruit seem eternally plump and ever-fresh.

In fact, are these real fruits at all? Nobody in these paintings is actually eating them, however tasty they look. And the academic consensus is that they’re less an expression of human joy than symbols of the divine order. One scholar, Liliana Leopardi, says:

“Crivelli executed images that allowed the faithful to readily access the miraculous. (…) The painter’s insistence on such details as the vegetable and fruit festoons… was [not] a sort of personal signature. The artist was painting those festoons that were used to decorate paintings, churches and the city’s streets during important religious festivals. As such, the festoons signified a rupture with the mundane, they rendered the ordinary extra-ordinary [as] a permanent physical record of this manifestation of the sacred.”

“The interweaving of various fruits and vegetables… was almost certainly inspired by the constant use of fruit and vegetables in a metaphorical sense in the Old and even more in the New Testament to signify consequences or works, here of course in this context, good consequences and works…The carefully simulated apples and flies… are symbolic.”

Lightbown also lists the specific meanings linked to each piece of Crivelli’s fruit, according to the symbology of the time: apples (crucifixion and salvation), cucumbers (the prophet Jonah), pears (Virgin and Christ), nuts (good works of the Virgin), plums (crucifixion and redemption), cherries (the blood shed on the cross).

Well, they’re the experts. But I keep coming back to the obvious human joy that went into painting these sacred fruit. Their symbolic significance seems to me to be a part of Crivelli’s love for them, not the sole inspiration for this love.

Five centuries before, the artist, living in the Veneto and then Ancona, had painted his environment – fruit, buildings and sky – as a way of reaching the divine. But, in Room 59, I used these paintings as a way of reaching the artist’s surroundings – places which seemed very far away. I was a child whose closest experience of the warm south was the occasional seaside holiday to Dorset, and whose closest encounters with its food were birthday parties at Pizza Hut and post-school snacks of Heinz tinned spaghetti on toast.

And so, looked at on a rainy Sunday in the middle of London, these fruity festoons represented a sensual promise of golden sun, dry heat and gustatory pleasure. Those big apples and plums might not be there to be eaten. But that didn’t stop me wanting a taste.