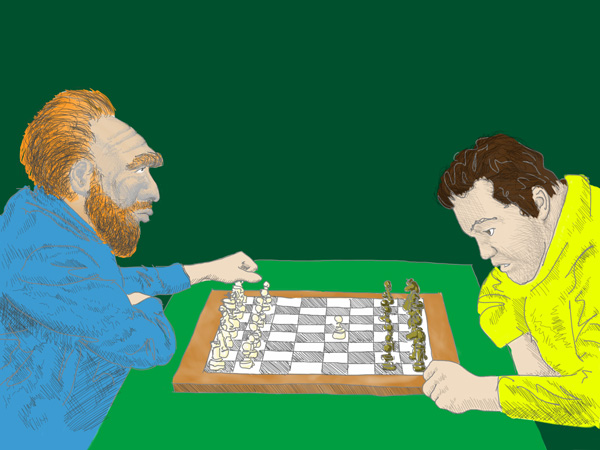 Under the skin, Neanderthals are the same as us.

Recent studies into our ancestors have shown and continue to demonstrate modern behaviour. And by ancestors we are not talking about our great-grandparents that fought in the war. We are referring to previous forms of humans. Nowadays, these old human forms are commonly understood as so dissimilar from us – the modern and so very evolved beings – that we tend to call them hominins. It is accepted that they belong to our family, but they are seen as those weird cousins that we are happy to have around, but somehow do not really fit in. The feeling is so strong, that most scientists even consider Neanderthals as a different species from us. And again, they do not call them humans, but hominins!
The truth is that most of us still have Neanderthal genes. If you have red hair you are the carrier of a very specific mutation called MCR1 that is directly inherited from the Neanderthal genome. So, why do we think about ourselves as somehow superior and more intelligent than Neanderthals? A lot of people will say “because we are civilised”. Well, I am sure that a lot of us will agree that being civilised is a highly debatable term. Sometimes we do not even need to leave our building to understand that many of our neighbours – fellow modern humans, convinced in their superior intelligence and behaviour – are actually not that civilised.
In fact, Neanderthals had a much larger brain than us (yes, this is a known proven fact!). They lived in small communities, adapted to different environments, buried the dead, used ornaments and eventually make-up, and even possibly were the authors of cave paintings such as Altamira (cover of “Science” magazine, 2012). I am not even going to examine their hunting skills and ability to make fire. I wonder, how many of us would be able to survive in such a harsh cold environment in the wild? Yes, and we are so intelligent…
For some reason we tend to think of ourselves as highly developed beings. We are proud of our political system, our economy, our social structure, our religious (or non-religious) views. We are aware they are not perfect, but we truly believe those are the most advanced systems in the world. The worrying part is that we expect everyone else to be like us and to adapt to the world as we do. For centuries we have been trying to colonise other territories to try and make them think like us. Back in 1494, the Pope even divided the world into two so that the Portuguese and the Spanish could conquer and spread the seed of the most advanced Catholic way of living at the time. We do not even need to go that far back to remember that in 1884-85, European countries divided Africa using a square ruler so that everyone could get their share. Obviously no African people were consulted, because after all, it was all “for their own good”. Europeans were modernizing those countries and bringing them the fortune of technology, industry, democracy! This has been repeatedly shown in history throughout the world.
Without going into the issues related with people’s identities, countries’ artificial divisions and many other concerns, I focus on the prejudice of evolution. Europeans clearly thought of themselves as more evolved and, therefore, had to impose their modernity. They completely ignored the natural rhythm of those people and did not consider the possibility of them being happy living in their own systems without their involvement. Because they did not have trains or electricity, they were considered inferior and less evolved, instead of simply being seen as differently adapted.

Maybe technology is different with computers, mobile phones and satellites, but the same applies today. Countries that believe that they are more politically advanced always try to impose their governmental structure on countries where that system is not used. Economically wealthy countries that believe that their system is a success always try to indoctrinate less wealthy countries on how to become rich. People that believe they are more evolved in their religious views always try to evangelise others that have not yet seen “the light”. I wonder, why does it have to be like this? Be it a country, tribe or individual, why is it not acceptable for one to develop at its own pace? Being differently adapted to the world does not mean that you are inferior; the same way that not having a mobile phone does not mean you are not able to communicate with the rest of the world. Different adaptations of life in general do not have to be considered better or worse, or more evolved or less evolved simply because they are different! The same happens with our Neanderthal ancestors. They are not hominins, but humans, just like us. Neanderthals are the same under the skin.