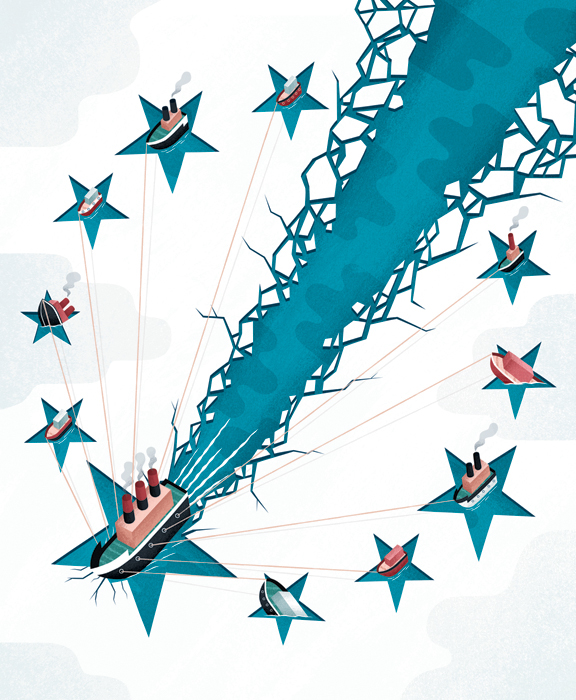 Long live the spirit of Europe.

Living abroad comes with many traditions and little rituals that make distances and borders more seamless. One of them, for me, is the mandatory weekly skype conversation with my parents where we keep in touch, exchange news and gossip and, most of the times, find ourselves plainly hanging out.
One of the questions they ask me fairly regularly is “whom are you living with now?”. This is not because my house has a revolving door on an incoming/outgoing flux of flatmates (though, this is London), but mostly because they see something very fascinating and rewarding in sharing a roof with a Portuguese, a German and a Peruvian.
Until 1969, a Portuguese woman could not leave the country without permission from her husband and now, here I am, living in a melting pot. And it’s the normalcy of it that is fascinating: how standard it all became.

Portugal joined the European Union after my 1st anniversary and when it abolished its internal borders, I was 10. Joining the European Union came as a follow up to over 40 years of fascist dictatorship. I dare say that the development of the democratic country is closely knit with the European Union, for the better and the worse.
Being European is very much embedded into who I am. I am Portuguese first (and proudly) and European a close second. Like many of my peers, I have done an interrail, benefitted from the Erasmus programme and have friends scattered all over the Eurospace.

A couple of weeks ago, my Peruvian and German flatmates were discussing their own European feelings and migrations for an (EU funded) art project. Though both are, in the very least, legally Europeans and have largely experienced from the benefits of feeling at home in a number of countries, their perspectives on it were, nonetheless, very different from one another.

My Peruvian flatmate has lived half of her life in Europe. Legally at least, being European was a status that needed to be conquered, but she consciously opted in. She lived in three different countries and absorbed the languages and the cultures. While she is, ultimately, European in all aspects but birth, she will permanently be an outsider.

My German flatmate grew up in the aftermath of reunification. His blossoming matches the one of his country and he was a product of years of post-war guilt and an immense self-conscience. Despite its being again the centre of Europe, Germany is an exercise of restraint of power and pride. And its neighbours prefer it that way too – Germany in power is an uncomfortable situation for itself or for its neighbours. And this awareness also contributes to a political standstill: it has the power to be the leader and the historical weight to hold it down.

Even amongst different countries, the experience of Europe is very different. There are very strong internal divides: North/South, East/West, industrial/lazy.
Myself, I come from the poor peripheral countries, the PIIGS. As punishment for being lazy and Mediterranean, we were transformed into the Guinea pig for economical terrorism – quite successfully I might add. We followed our lessons religiously as good boys and girls (and definitely not Greece) and now we have no such luxuries as a future.

Despite its advantages and disadvantages, the way we analysed and criticised Europe it’s like a member of our family. It’s concern and reprimand, honest and hard critiques because we can only expect the best from our own. Redesigning Europe is like dedicating some time for personal development – you’re bettering yourself and who you are.

Currently, Europe is under heavy fire and while I’m writing this, I am unsure if it has the grounds to carry on as it is. What I am sure about is that the conversation is terribly skewed and somehow incomplete. The economical perspective seems to be the most, if not the only, relevant thing to be taken in account. And what about us? If Europe is dismissed because it was a failed economic union, what happens to us, the generation born in the eighties and nineties that was raised with the spirit of Europe?

So I read about it and researched and personally, being such an integral part of my identity, I felt surprised that, at least for the first 40 years, the European Union was no more than a commercial agreement.
Why did that surprised me, I don’t know. Nor do I know if the fall of Berlin Wall changed or emphasised any potential European spirit by creating its centre and giving a new breath of fresh air to a transnational cooperation.
But the question imposed – Is there an European spirit after all? What were we fed and taught, but mostly, were lucky enough to experience?

I guess it does depend who you ask. In most history and economic books, European Union was an economic treaty to share, protect and coordinate resources. In some philosophical and contemporary critique books, you’ll find there is such a thing as a common spirit, which is as integral as a trade union.

Indeed, there is a cultural and intellectual network since the dawn of a European artistic practice; shared history of conquests, war and colonialism; and a transnational moral code of liberté, égalité, fraternité embodied in the post-war thinking.
If the economical bonds preceded or are a product of this, it ends up being irrelevant: it’s only wise to do business with your neighbours, you have more negotiating power with whom you know, and it’s always better to be a superpower together than a myriad of small countries. One aspect could make the other ones stronger. At its worse, in a self-justifying cycle and, at its best, there you go: a uniform identity.

So it is disheartening to see that rarely the cultural, intellectual, moral perspectives come into play when talking about the role of the EU today. In face of an economic disaster, nothing else seems to matter. It’s not how it feels for us, though, the sons of Europe. What will happen to us? Will we become orphans of the European utopia? Is this identity meant to disappear?

And why don’t British people see themselves as Europeans? Tony Judt would argue that the UK lacks the shared experience of the constitution of borders and invasions but, at the same time, the UK (or, better yet, England) created its own Union with the Commonwealth and the US. What we have created amongst ourselves, England created with its former empire.

Still somehow we ended up here. Not only due to the prominence of the English language, but also because London is the door of Europe to the world.
This is a privileged position as it can actually decide to walk in or out. It’s European enough to understand and assume the identity if they so chose, and it’s distanced enough to discard it as somebody else’s. Whatever it chooses to do, for me the battle is already lost when, ultimately, the game is all economical.

To me, there seems to be four different stages in the development of the collective spirit of Europe: Renaissance, colonialism, Enlightenment and war. Strangely they work a bit like the cycle of life: development, expansion, maturation and death.
Unlike any other continent, over the centuries, Europe has gone through the whole cycle and is now on its aftermath, with a sapience and consequence that stands it apart. For the first half of the XXth century, Europe imploded and nearly perished and, in its post-mortem phase, when it was trying to stand up, it decided that it stood better in Union. It decided that all of that wouldn’t be forgotten – the good, the superb, the inhumane and the cruel. Europe was everything and had to live with it.
It’s a heavy cloak the European one, with the weight of guilt and tradition.
The thing is in the aftermath of war when there was very little still standing, the European spirit prevailed. When the current economic systems fails, Europe will prevail.
Focusing on the economical independently from the moral is not European at all – it is dismissing history, and tradition, and people and identity. And it’s only half truth, because we can’t go back, we won’t go back and we have nothing to go back to.

So it’s time we start having a meaningful discussion about Europe as it is: it’s a house with flatmates from different nationalities, who are speaking a language other than their own, while discussing why are they all so different and still share the same identity.