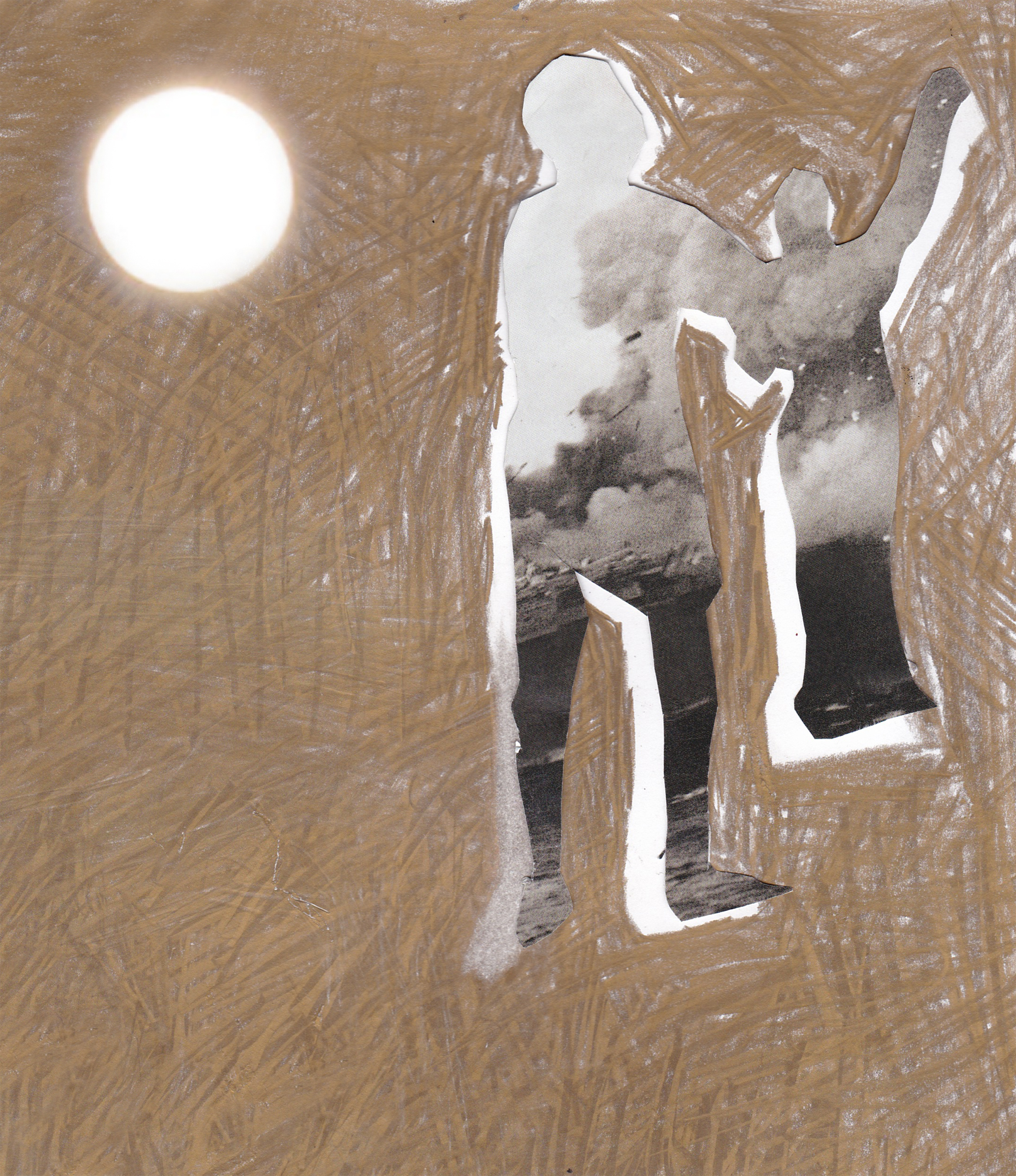 Late night happenings under the moon.

At night the wind blows without great force but the slight, constant breeze makes it necessary for her to wear the cloth overcoat.  It is a fine old coat.  A happy coat given to her by a happy mother.  She cannot pull the sides of the coat together to button it up any more.  Yet every night she tries.  The coat is worn and shiny and she likes how the moon sometimes reflects off the worn material.  It makes it sparkle and gives additional luster to her words.

She folds her arms across her chest, covertly tugging at the coat lapels, trying to stretch the material so that a button will slip into a hole.  Frustrated by her failure to mate the button with a hole, she directs her anger at the wind, blaming it, and not her fat, for the chill slithering up her exposed housedress.

The anger has made her glad and she mumbles as her footsteps crunch on the driveway.  When she twists her ankle in a pothole the mumbling gives way to a cackling staccato.

She falls silent as she reaches the end of the driveway.  The overgrown weeds at the foot of the pavement can be dangerous.  Especially at night.  She makes hissing sounds at the foliage; no rodent accepts her challenge.

Chilled, yet confident, she looks at her watch.  It is five-thirty a.m.  It is late, her latest time since early spring.  Her anger returns.  She pivots and faces her house.  The rotting beams and sunken porch push the house out towards her in a decayed slope.  The broken stained glass windows, whipped by thick branches, do not have moonlight to advertise their faded glory.  She cannot see the twinkling reds and blues: there is only darkness and the slashing of leaving scratching glass.

She spins, shivering, her voice rising an octave with each scream.  The words, smothered by her screams, explode from her throat in a cacophony of taut, stretched squeals.

Her throat burns yet her voice rises steadily until its pitch can only be heard by dogs.  She flaps her arms as she stares at the apartment building across the street.  After a pause her shrieking continues.  From a second floor apartment inside the building Tommy Eromagne looks at his clock and sighs.  She was late, that’s all.  Nothing to be alarmed about.  Now he can relax.

Tommy despises sleeping and is thankful at his age that he requires only three hours of it.  He fears sleep as much as she fears the nightly demon that propels her out onto the curb.  Tommy recognizes the sound of fear and it makes him less afraid when it isn’t just a silent throbbing inside his chest.

Sometimes Tommy attempts to understand the old woman’s screaming story about her mother, but it’s not that important to him anymore.  When he relaxes his interpretive inclination and simply listens to her voice, it becomes a kind of soothing litany, like a religious chant, where the sounds, not the words, are what move him.

Listening to her nightly bouts with fear encourages him.  He mouths each of her screams.  Tommy would like to scream but he has a bad heart, a very bad heart.  He can’t scream so he must pass his evenings listening to the erratic heartbeat that is just waiting for the chance to stop.  Tommy knows the heartbeat will want to stop while he is asleep and can offer no resistance. The louder and more frantic her screams, the more stress he places on his respiratory system, dwindling his energy until he drops off into an exhausted sleep.  When he awakens a few hours later he is proud of not having given up those three hours without a fight.

Tommy knows that as long as he is willing to fight fear the battle will continue.  He isn’t sure if his resisting makes sleep respect him enough to overpower him for only a few hours, or if sleep enjoys the skirmishes and does not wish for them to end.

The sudden crash of bursting glass ends the screams filtering into his bedroom window.  Tommy pulls himself up to his window in time to see the heavy woman in the cloth overcoat fall to the pavement.  Splinters of glass from a hurled beer bottle prick her legs, forming warm thin lines of red that stain the sidewalk by her feet.

Shut the fuck up,” yells a male voice from the apartment beneath Tommy.

The woman looks up at Tommy’s neighbor.  “Aeeeeeeeeeh!” she howls.  An empty jar of spaghetti sauce explodes just inches from her head.  “You stupid bitch!  Get the fuck back inside! I gotta get my sleep!”

From a window above Tommy’s a female voice calls out, “Why don’t the cops do something about her?  Look at her.  My son says she shoots beavers all the time.”

Tommy stares down at the bleeding woman.  When he sees her look up he ducks his head.  After a brief pause he peeks up at the window.

A third tenant’s voice joins in.  “With all that goddamned money she’s supposed to have you’d think she could afford a muzzle or something!”

“I’ll muzzle that witch,” shouts out a young voice.  The apartment building spits out a water balloon filled with urine.  It lands with deadly accuracy on the screaming woman’s shoulder, splattering up into her face.

“That’ll piss her off,” the youngster shouts out.  A chorus of tenants’ voices laughs their approval.

A police car pulls up to the curb.  Two officers, each biting into a bagel, approach the prostrated woman.  They gag at her smell and toss their breakfast into the street.  An arrogant rat retrieves the discarded bagels and greedily chews them underneath a battered 1998 Honda Civic.

The policemen are reluctant to help the woman to her feet.  Rubber gloves are snapped over their hands.  They frown at each other and look up at the building behind them.  Every window seems to have a head attached to it, shouting down at them to drag the woman off, take her away.

The sky is a dull gray; daylight is swallowing the night.  As the woman is stiffly raised to her feet a roar of approval showers down on the reluctant police officers.  The cops, holding the moist and foul smelling woman at arms length, face the tenement and execute a mock bow.  It excites the tenement crowd and they scream even louder.

The building seems to tremble, but what is really trembling is the woman’s right arm.  While the policemen are bent at the waist, she lunges at the holster of the officer bowing to her left.  She’s surprised how easy it is to lift the gun from his belt.

By the time the policemen complete their curtsy, the screams of approval have become screams of terror.  Every head from every window ducks to the floor.  Every head, that is, except Tommy’s.  He’s frozen at his window sill.  The woman looks up at his window.  They make eye contact.  A crisp crack and the tapping of glass stuns Tommy.  He looks down on the office to the woman’s right who is aiming his gun at her.  Tommy is sure that cop has just shot the woman.  A burning sensation in his neck distracts him but he can see the woman dropping to the ground, as if in slow motion, clutching her side.

Tommy feels dizzy and staggers back.  His feet crumble and he bangs his head against the headboard.  The pain in his neck disappears but now he is having a hard time breathing.  An irritating cough soon turns into a choke and Tommy is laying on the bed, spitting up blood.

“That sonofabitch shot me!  She shot me!  Goddamn her!”

Tommy would like to call out for help but he can’t speak.  All he can do is spit blood.  His wheezing is loud and each exhale is accompanied by impressive propulsion of fluid.  Tommy feels tired, very tired, but he will not sleep.”

Tommy grabs the headboard with both hands and pulls himself up.  He feels more confident now.  His breathing seems to be stabilizing.  Perhaps all the blood pouring out his nose and throat is decongesting his lungs.  But this damned dizziness is frightening.  He doesn’t want to feel so dizzy.

Tommy strains to hear the sounds of the outside world, the sounds of rescue and comfort, but all he can hear is his labored breathing and vomiting.

Tommy doesn’t understand why the room is getting darker.  He knows that sun must have risen by now.  His globular reading lamp burns on his night table right above his head, but it looks as if it’s hundreds of feet away.  The round lamp glows like a distant moon.

Tommy Eromange’s head is spinning so fast he closes his eyes.  Tommy doesn’t want to close his eyes, but with his eyes shut he can concentrate much better on his hearing.  He strains to listen for sounds of help and relief, yet the only noise he can make out is the frantic pounding of his heart.

A large weight seems to have dropped on to Tommy’s chest and he opens his mouth as wide as he can, gulping air.

By the time the attendants strap him in, Tommy’s frozen lips are a circle of blue.  As they lift him up into the ambulance a sudden gust of wind floats the fabric, exposing his face; his exhausted eyes reflect the daylight and dozens of heads staring down at him from their window ledges.

Mark Blickley is a proud member of the Dramatists Guild and PEN American Center. He is the author of Sacred Misfits (Red Hen Press), Weathered Reports: Trump Surrogate Quotes from the Underground (Moira Books) and the recently published text-based art book collaboration with Amy Bassin, Dream Streams (Clare Songbirds Publishing). His video, Widow's Peek : The Kiss of Death, was selected to the International Experimental Video and Film Festival in Bilbao, Spain. He is a 2018 Audie Award Finalist for his contribution to the original audio book , Nevertheless We Persisted .