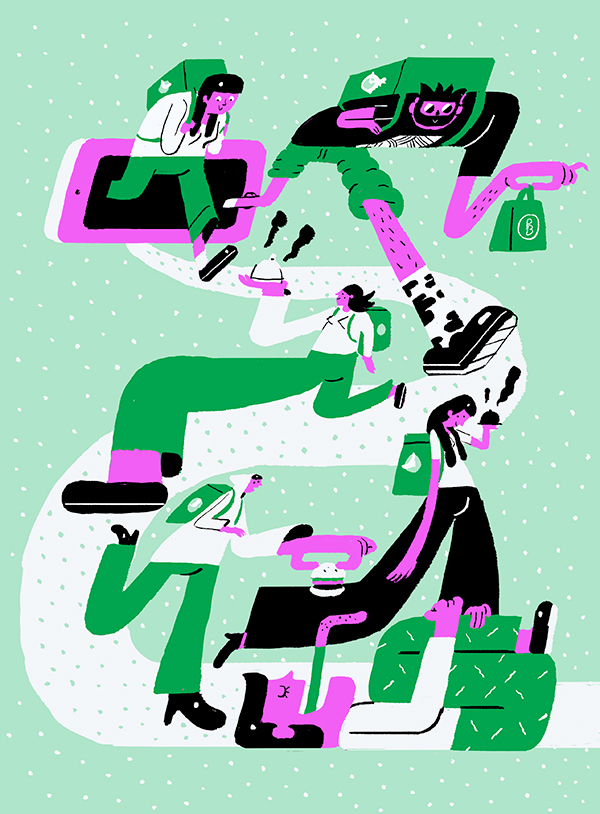 The need to satisfy hunger is an unconscious impulse. But the question of how to eat is always a moral choice. And the latest one of these choices I’m facing involves a cute cartoon Kangaroo.

The history of these choices is a very long one. Kosher laws have been followed for millennia, and there have been vegetarians since at least the time of Ancient Greece. The morality of food has influenced works of art from St Catherine of Siena’s anorexia-induced mystic letters, to Archimboldo’s satirical Renaissance-era portraits, transforming his subjects’ faces to baskets of fruit and vegetables, to Upton Sinclair’s influential early 20th century novel ‘The Jungle’, which led to a public outcry over conditions in America’s slaughterhouses. Since then, the diet industry has swelled to a market size of at least $20bn a year in the US alone, fuelled by a global epidemic of body-shaming and nutritional pseudo-science that’s as destructive as our collective dependency on sugary and salty food.

Most recently, the digital and mobile revolutions have reshaped much of our daily lives – and hunger is no exception. But, far from making things easier, it has only deepened the moral dilemma of how to eat well.

I’m not just talking about the rise of the food blogger and the endless restaurant and dinner-table shots on Instagram. We can now get food delivered directly to us via our smartphone. And, where I live, there’s one big provider of all that digitally-enabled eating pleasure. Deliveroo is taking over.

Every day in London, thousands of fingers tap a cute Kangaroo logo on their smartphone screens. As a result, every lunchtime and supper time, you can see young men with huge, insulated square food-storage backpacks, branded with Deliveroo’s turquoise and black corporate colours. Sometimes they’re riding their bikes across an intersection; sometimes they’re hovering around a restaurant and waiting for their orders. In my part of the city, they went from nowhere to everywhere, all at once, about six months ago.

For some city dwellers, isolated from older and poorer peers by smartphone ownership and a certain level of disposable income, Deliveroo is to food what Uber is for transportation: friction-free, convenient, and that bit more expensive than the old-fashioned alternatives of public transport or home cooking.

It’s all so easy – and fun. Tap Deliveroo’s cuddly kangaroo logo to open its app, and you’re immediately confronted with a sumptuous scrolling feed of local restaurants, ordered by proximity. It’s a Twitter for the tastebuds, a Facebook for the famished, except much more satisfying, as it delivers actual food, instead of digital Likes. Choose your restaurant, then your meal, watch your GPS-tracked driver approach, say thanks, and eat. Deliveroo’s extreme convenience is also reinforced by some serious side benefits for the socially awkward: no more awkward phone conversations to the takeaway! no more queuing and getting elbow-barged at the restaurant!

This cleverly-provided convenience extends beyond the usability of the app, and to the Deliveroo brand itself. From its cartoon kangaroo logo to its winsome corporate vocabulary – the people on the bikes are, apparently, “Roowomen and Roomen”, according to the service’s FAQ page – the company reinforces its subtle snob appeal to its socially anxious users. And that £2.50 extra you pay per order, on top of the cost of the food, handily confines the service’s ubiquity to those parts of the city, office districts and affluent suburbs, that can afford it.

Like Uber, Deliveroo’s convenience for the user comes at a cost for others. These costs are buried, hidden and insidious. Look a little deeper than the screen of your smartphone, past the cute Kangaroo logo, tasty food and extreme convenience, and you might lose your appetite.

Just as ordering an Uber is one more handful of earth on the coffin of London’s centuries-old Cab trade, ordering Deliveroo isn’t an unambiguous gain for the city’s restaurants. One expert suggested in the Telegraph that vendors will feel the squeeze once the deliverer gets big enough. “Potentially the operator will look at this and think that as long as ingredient and preparation costs are covered I don’t need to sell at same price as I do in the restaurant because with delivery I don’t have to worry about space or staffing costs and this is incremental revenue,” he added. Cut your margins or suffer, in other words.

And what about the Roowomen and Roomen? Like Uber, Deliveroo depends on freelance manual labour, paid per delivery, with drivers often earning – according to data from Glassdoor – around £7 per hour, less than the national Minimum Wage, not to mention the city’s Living Wage. Rates are soon set to tighten further, dropping to £4.25 per delivery, though Deliveroo claims its hardest-working drivers can earn up to £12 an hour. Try living on that in London!

One of London’s free newspapers, the Evening Standard, gave Deliveroo the typical “colour feature” treatment recently, with one of its writers having the pleasure of being a Rooman for the day. But what was clearly originally pitched as being a light-hearted exploration of a new kind of city job swiftly turned dark. The journalist-turned-Rooman was ignored, and untipped, by an endless stream of customers. After all, it’s so easy not to give any extra cash when one of the service’s intrinsic advantages is paying for everything through your phone. And the feature brought home the physical wear and tear of working for Deliveroo: the writer complained of carrying a backpack “roughly the size and shape of an Ikea bedside table” and being left “tired, hoarse, cold and starving”.

If you’re feeling particularly pretentious, you could see Deliveroo’s success as emblematic of the second machine age of the replacement of people through apps and automation, which is “bound to bring about severe dislocation“. If you have a problem with the digitally-enabled tectonic societal shift away from decently-paid middle-class jobs, and towards an insecure gig economy of underpaid freelancing, then you should have some qualms about tapping the kangaroo.

Especially when there is so much venture capital cash behind it. Set up in 2012, Deliveroo had three separate money-raising rounds last year, getting an overall investment of £66m. Corporate backers include Facebook – raising the spectre of some future data-sharing deal: order a pizza, get followed around by pizza ads. Digital synergy – at the expense of personal privacy.

Not that I’m in any position to deliver a lecture. After exposing the hideous cruelties of New York abattoirs in ‘The Jungle’, Upton Sinclair started to follow a raw food vegetarian diet. In other words, he made a moral choice on how he ate, based on the knowledge he had gained from researching and writing his book.

But, despite my reading up and discussing foody topics, from the evil health-sapping qualities of sugar, to the harsh cruelty of factory-farmed meat, to, now, Deliveroo’s sketchy business model, my moral eating choices remain dubious. I continue to snack on jellybeans and Skittles when stressed out. I eat meat bought at the supermarket. And, from time to time, I tap the kangaroo and order some takeaway through my phone.

Last time I ordered with Deliveroo, it had been a more difficult day than usual. Nothing major, just a struggle at work, followed by an aborted trip to a ludicrously packed restaurant and a silent bus ride home. But it was enough. Half an hour later, an excellent burger was at the door. Patty & Bun in London Fields, if you want to know. (Is it nice there? I’ve never been.) I didn’t tip. The Rooman rolled away, onto his next £4.25 delivery.