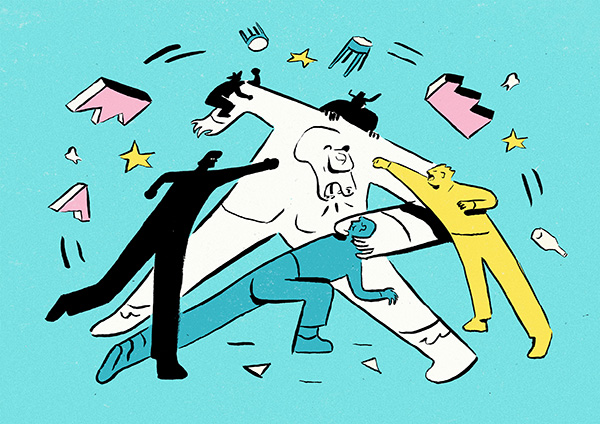 Bear among the dogs

When Bear took on the gringo.

I used to work for the Bear when he was young and strong. It hurts me to see him old and half-lame. But he’s still the Bear. I was there in Archie’s last year when he took on the gringo.

I talk about those times with Bear to anyone who will listen, but some of it is mierda.  My wife, she say, “Old days fade and turn into mentiras.”  Now I live behind these thick glasses and work in a hardware store in Raton, and the Bear . . . . he never figured that age would catch him. He planned to be young forever. Nowadays a big bushy white beard hangs on his chest, and his hair is white too, and his back kills him most of the time. Bear, he is like the rest of us. He never saved a dime, so here he is at sixty-three still taking people from the city out to fish and sometimes to hunt. He lives in a single-wide he bought in 1972, lives there with his third wife Jennie, the only smart one he ever married. Or she married him.

That last time I saw him, before they took him away, I was in Archie’s Beer Barn, like I said. Archie’s real name is Celestino Archueleto and he runs this bar in a metal building out near Cimarron, mostly for us Latinos. Sometimes Bear would come by.

Bear, he’s white and a guide in northern New Mexico and southern Colorado.  Used to be one of the best. In the old days, we ranged all seasons and all country. We carried pale white men back into the mountains for their moment of glory, their cuento de muerte.  Bear was part of the mountain – he knew where the animals would feed, where the fish would hide, where the turkeys would roost. He acted like a bear too – you could never tell what he was thinking by looking at him.

That day in Archie’s, Bear wore what he always wore, a big dirty coat made out of an Indian blanket, with jeans and boots. Pushed back on his head he had a sweated-out felt cowboy hat with a snakeskin band – a snake he killed himself, years ago. His big belly hung out and he shuffled along like his back hurt, but he had a wave and a hello for everyone. I had hunkered down with some of my friends in the corner, and Bear stopped to talk for a bit.  He told us he was down to one truck and one tent.

En buenos tiempos, we kept a full camp, horses and a couple of jeeps. It was our job to pick the sportsmen up at the airport, set up their tents, feed them and pour liquor in them. It was our job to throw them up on the horses, take them to the animal, skin and slaughter the animal once it was dead. Nothing in this was a bad thing. Bear, he respected the animal and its death. Also, the kill by the sportsman – en júbilo for the hunter and good to see. Most of these rich white men, they wanted to be Bear’s friend, so that was okay too. I was Bear’s Mexican, there to cook and wrangle horses, but I’m pretty agringado myself, white enough to keep everyone comfortable. The big thing for me? I got to work in la más hermosa tierra de mundo.  Until Bear went broke.

Like an animal, Bear doesn’t live in the past.  So we visited about what he had coming up. Outside of coyotes near his casa, he hadn’t shot anything in months – still, he thought he’d make an elk hunt in the Fall. He also thought he’d go fishing soon, and we made noises like we would go too. Then he clomped over to the bar to visit with Archie.

Archie’s, it doesn’t see many outsiders, but every once in a while, guys out on a road trip together pull up. They park their cars or their bikes or their RVs and they stroll in to soak up Archie’s beer. This day, a bunch of Anglo guys out of Albuquerque had driven up in their Corvettes. They must have been in some kind of car club, a club based on how much they could spend on a toy with four big wheels and a cloth roof. They all chose tables way across the room from us and Archie waddled out from behind the bar to take their orders.

Things went fine for a while. There’s always un buen tipo who can talk to anybody, and so it was this time. This nice guy in shorts and a big fat nose wanders over and we visit for a while. He was retired, but he used to be in the concrete business, so we talked about that, about pouring foundations in the winter, about how far you can truck a wet load. He visited with Archie too and spoke to Bear. His buddies and him, they milled around for about an hour sloshing down the beer.

But if there’s a nice guy in a crowd, there’s also someone ugly, who gets uglier when he drinks. These Corvette drivers had a loudmouth in a nylon jacket, dark hair slicked back from his face. He sat there wavin’ his hands and talking up his opinions pretty estridente. It turns out he was mucho importante, and of course we wasn’t. He had been in lots of great places, and this wasn’t one of ’em. He drove a great car, and the folks around here, we drove rusty pieces of shit.  He was right – we drive what we drive and we buy what we can afford – old men and old trucks.

So Mr. Slick Jacket trots up to the bar to order another round of beer and he talks to Bear while he’s there. First he calls him Cowboy and then he calls him Old Man. Two other guys amble up and lean on the bar too, one beside Bear and the other near his friend, just to be close to Hombre Mucho Importante.  Mr. Jacket, he asks Bear, “Do you know you look like Santa Claus with a ponytail?”

Bear takes all this real mild, just sits there on the bar stool. Then the stranger starts in on the White Thing. He says, “Do you actually drink with those dirty Mexicans in the corner?” Meaning me y mis amigos.

I thought Bear was an old man, past all this, but once an animal learns something, it must not forget. Bear jabbed out at this pendejo, fast like a snake – he slammed the heel of his hand into the guy’s nose. Then he grabbed him by the back of the neck and threw la cabeza del hombre down onto the bar, uno, dos, tres. Bam bam bam! The guy folded up like a pile of clothes on the floor at Bear’s feet. The other two Anglos, they closed up quick on Bear and he jumped to his feet. He spun on his toes to face the one and then to face the other.

A long time ago I saw a pack of dogs corner a bear up against a cliff, and it looked just like this. Them hounds would charge in on the bear’s back and he would spin around to try and catch them. This bear grabbed two or three dogs and mauled them up quick. This was casi lo mismo, as Bear twisted from one to the other. He held them off with his mal de ojo and his stone face.

Archie had been caught sleeping, but he hustled out from behind the bar with a baseball bat in his hands. He sidled in between Bear and the other guys at the bar and waved that bat around saying, “Now – Now – Now.” The whole crowd of Anglo guys all jerked up from their tables and come running over. The young ones turned all red-face-angry and the old ones grey-shook-up, but they added up to a pack. We Latinos, we nailed our colillas to the chair.  Bear might have been my boss once, but brown skins don’t have brawls with white skins and get away with it.  I felt real bad about it, but I didn’t do nothing dumb.

Archie stuck the bat out to let them know he’d handle things, not them. The friendly gringo we first talked to helped Mr. Jacket to his feet, got him a bar rag to hold on his face. We could all tell this loudmouth needed the medics – he had left a couple of his teeth stuck in the bar. If Mr. Jacket got hauled off to Emergency, there would be a police report. So Bear, he’d have to have a long talk with the Sheriff.

Bear stared at the bloody-faced man, and he smiled like the sun come up. He turns to Archie and says, “After you call the ambulance and the police, maybe I can call my wife? I bet you they send me to County for this one. Jennie will want to know where I am tonight.”

That loudmouth, he got his cuento del vergüenza, beat up by an old man, and Bear got to feel young again. All of us in the corner, we were surprised. We had never known what Bear was thinking. All those years, him the Anglo and us the Mexicans. But somewhere in there he must have been thinking we Latinos were okay. Or at least we weren’t the dogs. Bueno.

Scott is currently working on his fifth novel and second novella. He lives in northern New Mexico, after stints in the Netherlands, Scotland and Norway, plus less exotic locations. He’s worked for a power company, a lumberyard, an energy company, and a winery. He has three books out, through Southern Yellow Pine and Fomite, and a fourth on the way.