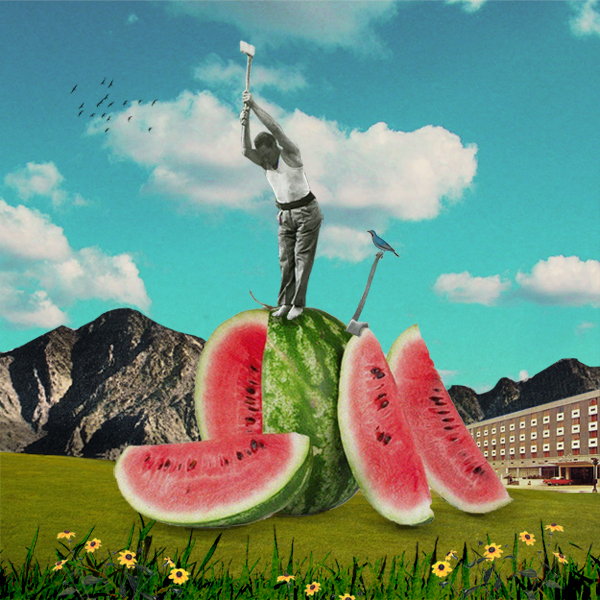 Words by Maria Shirts & illustration by Sammy Slabbinck for #amelonaday

How many times did you feel the urge to eat a juicy watermelon but faced the challenge to carry it?

I don’t know about elsewhere but, in Brazil, most places sell them like nature brought it to Earth – a heavy and inconvenient fruit. How am I, carless, alone (or even accompanied) supposed to bring it home?

Fancy supermarkets already solved the problem by cutting into little pieces and selling it on trashy styrofoam trays covered in plastic. But it doesn’t taste the same and it’s so not eco-friendly it gives me allergies.

Even if I couldn’t care less about our planet, I fail to understand this kind of gourmet wave that insists on chewing up your food for you. It reached so many bizarre levels here, in my city, that even tangerines and bananas are being sold peeled in some expensive supermarkets, costing 3 times as much as the unpeeled ones (Welcome to São Paulo!!).

At least, the whole laziness and gourmet fetishism generated fun memes and impressive arguments on the pros and cons about peeled/unpeeled fruits. People got very ferocious about this lost generation and how the 2010’s were destined to be remembered as the decade of freakish and lazy urbanoids who preferred to buy peeled fruits than the whole piece.Just buy the damn fruits as they are for God’s sake.

But probably the best news that appeared in-between this utterly profound dilemma was about an eccentric salesman that gained his life by selling heart-shaped and pyramid-shaped watermelons – in Japan, of course.

According to this article, from July, these cute shaped watermelons are sold in Tokyo’s luxury market and cost about 12,9 thousand yen each (about £100). Despite their price, “they are not very good”, says Mototaka Nishimura, the store owner who sells those oddities, “but they’re a great piece of décor”.

Still waiting Haruki Murakami to explain me how is that true.

While that doesn’t happen, I’ll be trying to figure out how to carry my favourite inconvenient fruit home, not without making fun of freakish urbanoids — knowing, deeply, that they are ahead of me and actually solved this problem.